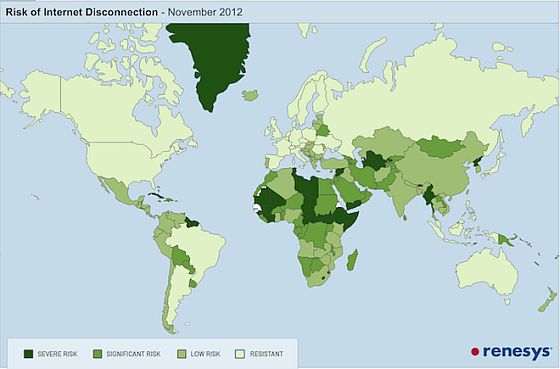 Wired: It’s becoming the trademark move of failing regimes: silence your critics and cripple their communications by cutting off the internet. Libya did it. Egypt too. And last week, Syria pulled the plug on its own internet system.

According to new research from network monitoring company Renesys, it could just as easily happen in many other countries too, including Greenland, Yemen, and Ethiopia. Sixty-one of the world’s countries have just one or two service providers connecting them to the rest of the internet.

“If you’re a sufficiently small place it’s almost inescapable that there will be so little internet that it’s almost trivial to turn it off,” says James Cowie, chief technology officer with Renesys.

On the other extreme, more than 30 countries — including the U.S., Canada and the Netherlands — have over 40 network providers each at their electronic frontiers. They’re almost impossible to unplug.

No disrespect intended towards Greenlanders, but I think they should have been left off the map. The massive dark green country at the top of the map jumps out as the largest country in jeopardy of having its internet access cut off. But there are only 56,749 people who live there. How many ISPs could they expect to have?