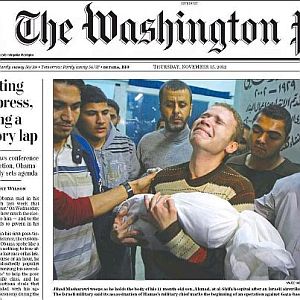 Amahl Bishara writes: One of the most wrenching images from the November 2012 conflict between Israel and Hamas was that of BBC journalist Jihad Masharawi holding the shrouded body of his eleven-month-old son. His face is gripped with agony, his eyes closed as he looks upward. We can imagine that he feels utterly alone in his grief, but he must also be aware of the men around him in this hospital room. Some or all of the men are likely fathers, uncles, or older brothers to young children. They reach out to touch Masharawi on his shoulder. In their downcast glances, I feel I recognize the strange shame of people who wish they could do more. Behind the camera, taking the picture, is a colleague, Majed Hamdan, a photographer for the Associated Press. Behind the photographer are all of us.

The photograph was on the front page of the The Washington Post on 15 November, and apparently it caused a hassle for the paper. According to ombudsman Patrick Pexton, many accused its placement of being biased. Many asked why this image was not “balanced” with one of Israeli suffering. Pexton replied that no such image existed, since, as of the day of Masharawi’s son’s death, no Israeli civilians had been killed by Gaza rocket fire for over a year. Pexton also described the fundamental imbalance in arms between Israel and Hamas, and concluded, “Let’s be clear: The overwhelming majority of rockets fired from Gaza are like bee stings on the Israeli bear’s behind.”

He is suggesting, but does not say outright, that an expectation of balance is unreasonable not only because an equivalent image from the “other side” may not be available but for another reason as well. Expecting balance obfuscates our understanding of conflicts that are not in reality balanced. Israel has some of the most advanced military technology in the world. Hamas has rockets with limited range and accuracy. Even more fundamentally, Israel remains the occupying power over Gaza, and thus has ultimate responsibility for civilian welfare — as well as a legal responsibility to end the occupation. (The metaphor of balance and the seesaw image it evokes has other problems, too. The myth of “two sides” to the conflict obscures differences of opinion and hierarchies of power within Israeli and Palestinian societies.) [Continue reading…]

1 thought on “Do photographs pose an existential threat to Israel?”