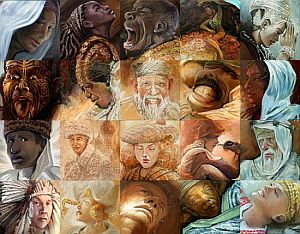 Daniel Levitin writes: Tom was one of those people we all have in our lives — someone to go out to lunch with in a large group, but not someone I ever spent time with one-on-one. We had some classes together in college and even worked in the same cognitive psychology lab for a while. But I didn’t really know him. Even so, when I heard that he had brain cancer that would kill him in four months, it stopped me cold.

I was 19 when I first saw him — in a class taught by a famous neuropsychologist, Karl Pribram. I’d see Tom at the coffee house, the library, and around campus. He seemed perennially enthusiastic, and had an exaggerated way of moving that made him seem unusually focused. I found it uncomfortable to make eye contact with him, not because he seemed threatening, but because his gaze was so intense.

Once Tom and I were sitting next to each other when Pribram told the class about a colleague of his who had just died a few days earlier. Pribram paused to look out over the classroom and told us that his colleague had been one of the greatest neuropsychologists of all time. Pribram then lowered his head and stared at the floor for such a long time I thought he might have discovered something there. Without lifting his head, he told us that his colleague had been a close friend, and had telephoned a month earlier to say he had just been diagnosed with a brain tumor growing in his temporal lobe. The doctors said that he would gradually lose his memory — not his ability to form new memories, but his ability to retrieve old ones … in short, to understand who he was.

Tom’s hand shot up. To my amazement, he suggested that Pribram was overstating the connection between temporal-lobe memory and overall identity. Temporal lobe or not, you still like the same things, Tom argued — your sensory systems aren’t affected. If you’re patient and kind, or a jerk, he said, such personality traits aren’t governed by the temporal lobes.

Pribram was unruffled. Many of us don’t realize the connection between memory and self, he explained. Who you are is the sum total of all that you’ve experienced. Where you went to school, who your friends were, all the things you’ve done or — just as importantly — all the things you’ve always hoped to do. Whether you prefer chocolate ice cream or vanilla, action movies or comedies, is part of the story, but the ability to know those preferences through accumulated memory is what defines you as a person. This seemed right to me. I’m not just someone who likes chocolate ice cream, I’m someone who knows, who remembers that I like chocolate ice cream. And I remember my favorite places to eat it, and the people I’ve eaten it with.

Pribram walked up to the lectern and gripped it with both hands. When they had spoken last, his colleague seemed more sad than frightened. He was worried about the loss of self more than the loss of memory. He’d still have his intelligence, the doctors said, but no memories. “What good is one without the other?” his colleague had asked. That was the last time Pribram spoke to him.

From a friend, Pribram had learned that his colleague had decided to go to the Caribbean for a vacation with his wife. One day he just walked out into the ocean and never came back. He couldn’t swim; he must have gone out with the intention of not coming back — before the damage from the tumor could take hold, Pribram said. [Continue reading…]

I remember as a child of 11 or 12 — somewhere around that age — falling and getting concussion. While dazed and frightened about possible brain damage, I started running through multiplication tables. This was a strange choice of neurological self-examination since I was never particularly good at mathematics, but my performance was sufficiently good that I quickly assured myself that aside from the thumping pain on the side of my head there was no lasting damage. (Who knows whether that was true since that was in the days before MRIs — I didn’t even see a doctor.)

There are all sorts of ways when, in response to a novel situation, we conjure up some ad hoc method to go in search of ourselves. It’s a strange undertaking since if we were truly lost, who could embark on such a quest?

The self lost in the form of amnesia Levitin describes is less self and more story. It is the construct of our inner biographer — a storyteller who compulsively assesses the quality of our life on a scale of accomplishments and failings.

But what the story of Tom tells after his biographical memories have been stolen by a tumor, is that personal development is much richer than the accumulation of memories.

Levitin is embarrassed to tell Tom that they had never actually been friends, and yet Tom is acutely attuned to the predicament of his well-intending visitor. He says:

“It’s okay. There’s often this . . . gray area, I guess you’d call it, in human relationships, isn’t there? We meet people, we see them every day, we say hello, but we don’t really know them. We say they’re our friends, but really, you can’t be friends with the hundreds of people you meet, can you? It’s enough that we had a shared history together. We were in the same places for a time. We were part of each other’s fabric.”

If the details of Tom’s past are now for him shrouded in darkness, he clearly remembers and continues to experience in a very nuanced way, what it means to connect with other people.

The self present is intact.

And as he invites visitors to take away with them possessions for which he no longer has any use, he also appears to be at peace with his future.

We shall not cease from exploration
And the end of all our exploring
Will be to arrive where we started
And know the place for the first time. (T.S. Elliot)