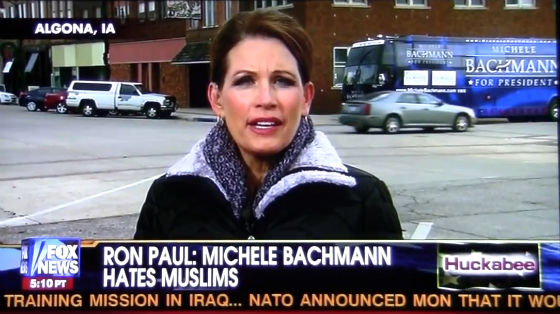 Tim Murphy and Adam Serwer report: Over the last four years, a die-hard cadre of activists and their allies in Congress have dragged the Republican Party into a fever swamp of Islamophobia and barely-concealed anti-Muslim bigotry. In their paranoid scenario, Islamic Shariah law is creeping into American courts; the Department of Justice has come under the sway of the Muslim Brotherhood; and the president’s engagement ring includes secret writing that indicates Muslim loyalties.

But after a November election that saw three of the party’s loudest voices on “creeping Shariah” defeated — and the GOP presidential nominee ignore the issue entirely — the anti-Islam movement within the Republican party may have peaked. Wary of further alienating a once-promising conservative constituency, mainstream Republican leaders have sought, publicly and behind closed doors, to distance themselves from the loudest of the Muslim-bashers in their midst.

“They have gotten a bit of bad odor,” says GOP powerbroker Grover Norquist, who has pushed to change his party’s tone on Islam.

Randa Fahmy Hudome, a former Bush administration official, Washington lobbyist, and prominent Muslim Republican, notes: “There is a self-policing factor in the Republican Party, when some members get a little off base on some of these issues. That’s the state of play right now.”

A turning point came in July, when Rep. Michele Bachmann (R-Minn.), along with four Republican colleagues, signed a letter demanding an investigation into the Muslim Brotherhood’s supposed infiltration of the State Department. The letter singled out a top aide to Secretary of State Hillary Clinton, Huma Abedin. Bachmann and her colleagues, deploying tenuous evidence and guilt-by-association, charged that Abedin should not have been given a security clearance because of alleged ties to Muslim radicals.

Days later, Sen. John McCain (R-Ariz.) had condemned Bachmann’s letter from the floor of the Senate, calling it “unwarranted and unfounded” and “scurrilous.” Speaker of the House John Boehner piled on, calling the letter “dangerous.” The chair of the House intelligence committee, Rep. Mike Rogers (R-Mich.), emphasized to USA Today that though she served on his committee, Bachmann’s allegations did not have the committee’s imprimatur. Sen. Marco Rubio, the Florida senator and tea party favorite widely touted as a potential 2016 contender, publicly denounced the allegations promoted by Bachmann and her allies, like former Reagan official and longtime anti-Shariah activist Frank Gaffney. [Continue reading…]