Politics rewards creeps — individuals whose desire to please others makes them willing to sacrifice any principal in the pursuit of power. The more pliable the politician, the more useful he is to the lobbies he serves.

This is why Chuck Hagel has made enemies in Washington — not because of any specific views he holds, but because he lacks the servile disposition that has become the norm. As former deputy secretary of state Richard Armitage puts it: Hagel “doesn’t care if people like him or not.” 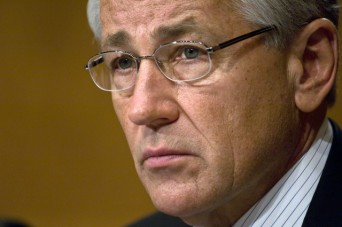 Bloomberg reports: If Hagel wins confirmation, he will face challenges such as the increasing threat of cyber warfare, readying military contingency plans for the volatile Middle East and jockeying with China for naval influence in the Asia-Pacific region.

The former enlisted combat veteran is uniquely equipped to take on four-star generals over how fast to withdraw troops from Afghanistan and how to cut forces and weapons in a time of restricted defense spending, according to friends such as Richard Armitage.

“He’s got proven guts,” Armitage, who was deputy secretary of state in the Bush administration, said in an interview before the appointment. “He doesn’t care if people like him or not. He knows who he is.”

Hagel, whose father died when he was 16, dropped out of college and worked as a radio disc jockey before going to serve in Vietnam with his brother Tom. When their armored personnel carrier hit a mine in 1968, Chuck, suffering burns to his body, dragged his brother from the vehicle to safety.

He came back from that war with two Purple Hearts and a conviction that, as he put it in a 2002 interview, “War is the last resort that we, a nation, a people, call upon to settle a dispute.”

“The horror of it, the pain of it, the suffering of it — people just don’t understand it unless they’ve been through it,” Hagel said in the interview for the Veterans History Project of the American Folklife Center. “There’s no glory, only suffering in war.”