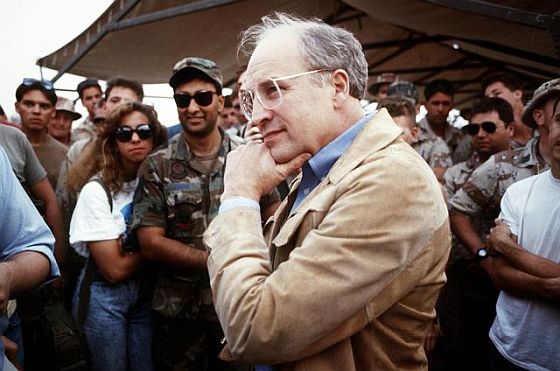 Advice from Defense Secretary Dick Cheney to American troops stationed in Saudi Arabia in 1990: keep quiet about the "Jewish lobby."

In 1990, American troops deployed to Saudi Arabia in advance of the Gulf War against Iraq, were advised by the Pentagon — then under Dick Cheney’s control — that they should not make pro-Israel, anti-Arab remarks while stationed in the Islamic kingdom.

That might sound like a no-brainer — clearly it was advise crafted for the purpose of making sure that young American soldiers lacking knowledge about the Middle East might avoid getting themselves in trouble or alienating themselves from their hosts.

But that’s not how organizations such as the American Jewish Committee, the World Jewish Congress, and the Simon Wiesenthal Center responded to the advice laid out in the Defense Department’s “Troop Information Handbook.”

In a letter to Cheney, Sholom Comay, AJ Committee president, and David Harris, its executive vice president, made it clear that they regarded the presence of American troops in the Gulf as being primarily to serve the interests of Israel.

“No one can be under the illusion that our presence in Saudi Arabia is intended to protect a fellow democracy,” Comay and Harris wrote, dismissing the kingdom and its neighbors as “current allies” of the United States.

Perhaps the most egregious element in the Pentagon handbook — the part that most offended these Jewish organizations — was that they were included as one of the taboo topics of conversation and referred to as the “Jewish lobby.” Troops were advised not to discuss the “Jewish lobby” or “U.S. intelligence given to Israel.”

Writing to Secretary of Defense Dick Cheney, the World Jewish Congress said it wishes to convey “our sense of distress at what appears to be a capitulation to bigotry and a surrender of our democratic values…”

The letter, from WJC Vice President Kalman Sultanik, urges that the material be withdrawn from circulation.

The American Jewish Committee, expressing to Cheney its “deep sense of hurt and anger,” says U.S. troops should not be asked to “submerge entirely those values of tolerance, pluralism, and open-mindedness that have made the U.S. a unique democratic society.”

Cheney neither withdrew the handbook nor apologized for its contents.

During the current hullabaloo over Chuck Hagel’s use of the term “Jewish lobby“, it’s reasonable to ask: given the level of loyalty to Israel which so many members of the Senate seem to expect from America’s top civilian defense official, would Dick Cheney also face strong opposition from his own party if he was once again nominated as defense secretary?