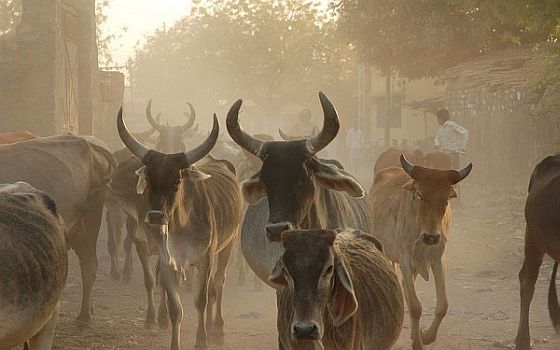 Ed Yong writes: Genomes are often described as recipe books for living things. If that’s the case, many of them badly need an editor. For example, around half of the human genome is made up of bits of DNA that have copied themselves and jumped around, creating vast tracts of repetitive sequences. The same is true for the cow genome, where one particular piece of DNA, known as BovB, has run amok. It’s there in its thousands. Around a quarter of a cow’s DNA is made of BovB sequences or their descendants.

BovB isn’t restricted to cows. If you look for it in other animals, as Ali Morton Walsh from the University of Adelaide did, you’ll find it in elephants, horses, and platypuses. It lurks among the DNA of skinks and geckos, pythons and seasnakes. It’s there in purple sea urchin, the silkworm and the zebrafish.

The obvious interpretation is that BovB was present in the ancestor of all of these animals, and stayed in their genomes as they diversified. If that’s the case, then closely related species should have more similar versions of BovB. The cow version should be very similar to that in sheep, slightly less similar to those in elephants and platypuses, and much less similar to those in snakes and lizards.

This is because BovB isn’t neatly passed down from parent to offspring, as most pieces of animal DNA are. This jumping gene not only hops around genomes, but between them.

This type of “horizontal gene transfer” (HGT) is an everyday event for bacteria, which can quickly pick up important abilities from each other by swapping DNA. Such trades are supposedly much rarer among more complex living things, but every passing year brings new examples of HGT among animals. For example, in 2008, Cedric Feschotte (now at the University of Utah) discovered a group of sequences that have jumped between several mammals, an anole lizard, and a frog. He called them Space Invaders.

The Space Invaders belong to a group of jumping genes called DNA transposons. They jump around by cutting themselves out of their surrounding DNA, and pasting themselves in somewhere new. They’re also relatively rare—they make up just 2 to 3 percent of our genome. BovB belongs to a different class of jumping genes called retrotransposons. They move through a copy-and-paste system rather than a cut-and-paste one, so that every jump produces in a new copy of the gene. For that reason, they spread like wildfire.

BovB was first discovered in the genomes of cows and other cud-chewing mammals in the 1980s, and seemed to be a signature of that group. Then, in the 1990s, Dusan Kordis and Franc Gubensek detected an extremely similar version of BovB amid the genes of the horned viper. It looked like this piece of DNA had jumped between species. Now, with complete genomes of the cow and other animals at hand, Walsh has more fully mapped BovB’s voyage through the animal kingdom. [Continue reading…]