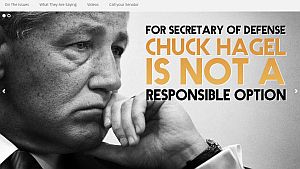 The Emergency Committee for Israel launched a website to attack Hagel's nomination.

Bernard Avishai writes: I think it is time to acknowledge, bluntly, that certain major Jewish organizations, indeed, the Conference of Presidents of Major Jewish Organizations — also, the ADL, AIPAC, the American Jewish Committee, political groups like the Republican Jewish Coalition, along with their various columnists, pundits, and list-serves — are among the most consistent purveyors of McCarthyite-style outrages in America today. Are there greater serial defamers of public officials in fake campaigns against defamation? Starting with Andrew Young and the late Charles Percy, and on to Chas Freeman and (now) Chuck Hagel, the game has been to keep Congresspeople and civil servants who might be skeptical of Israel’s occupation and apologetics in a posture that can only be called exaggerated tact.

Fault Israel and you are accused of faulting Jews in our collective state, or, the same thing, overlooking the venality of our enemies — things only an anti-Semite would do and, of all times, in the wake of the Holocaust. This is not a charge anyone in public life wants to suffer or try to deny. My Israeli friends love that old Borsch-belt joke, that anti-Semitism means disliking Jews more than necessary. For American Jewish organizations, the very idea that dislike is ever warranted is proof of bigotry, like Philip Roth’s early novels were proof of “self-hatred.”

AIPAC et al know that if American politicians — and especially those fighting routinely for Florida, Pennsylvania and Ohio — are not cowed by the fear of being branded as anti-Semitic they may not be embarrassed into backing Israeli actions ritualistically. Where is the shame and who is our Murrow?

I won’t presume to go through the credentials that make Chuck Hagel fit for appointment as Defense Secretary; I saw and heard him in person only once. I also won’t repeat, or defend him against, all the fatuous charges leveled against him. Others have done this better than I could. (If you want a comprehensive list of the AIPAC-inspired letters Hagel refused to sign, you can find it here.)

Suffice it to say that Hagel is a man of independent judgment whose views on the Israeli-Palestinian conflict track pretty much exactly with those of Haaretz. He was distinguished guest at J Street’s first national conference. Nothing he’s said has not been said by leaders like Ehud Olmert and intelligence chief Ephraim Halevy. Hagel is also a man, like George McGovern, who having served with distinction in the military knows the unknown dangers of resorting to military force without a clear diplomatic strategy and except as a last resort. So he refuses to speak glibly about using force against Iran the same way he refused to endorse war with Iraq. A Vietnam purple heart, he would in retrospect have engaged with the Viet Cong. Should he not now endorse engagement with the Taliban or Hamas, for that matter?

Why should this stance be thought anathema to Jewish organizations? Let’s get real. The latter throw their weight around, presumably on behalf of us Israelis, but really on behalf of the Israeli right, whose orthodoxy and pathos they relate to more readily than to Israeli peace advocates. The weight they have derives from their being able to hold American politicians to endorsing a “special relationship” with Israel, where special means unconditional, so that (as James Baker and Howard Dean discovered) even the desire for “even-handedness” is treachery. [Continue reading…]

Yousef Munayyer notes: What the debate on Hagel is sorely missing is a loud public voice akin to Colin Powell’s on Obama’s faith in 2008, who would respond to allegations that Hagel isn’t pro-Israel by simple stating, So what if he’s not? Hagel is, after all, an American nominated for the role of U.S. Defense Secretary and shouldn’t be pro-Israel or pro-any-country-other-than-the-United-States. If he was, that should lead to controversy.

This debate, however, has it the other way around because it is grounded in the notion that American support for Israel is as American as our Constitution. It isn’t, and it can’t and should never be.

Yet, this type of debate, framed around “pro-Israel” interests, dominates mainstream discussions about U.S. foreign policy in the Middle East and specifically as it relates to Israel/Palestine. For as long as that is the case, Washington is only kidding itself if it thinks it can ever successfully mediate Israeli-Palestinian peace.

1 thought on “Hagel and the neo-McCarthyite Israel lobby”