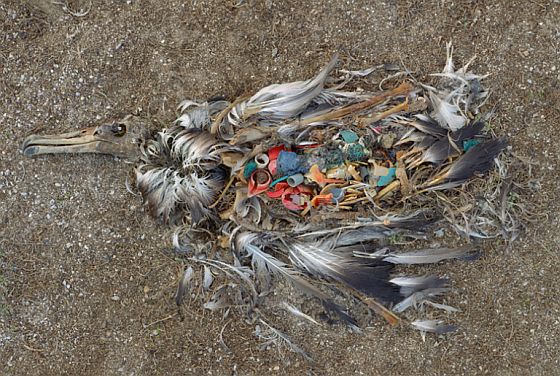 On the Midway Islands, near the heart of the Pacific Trash Gyre, thousands of birds die after consuming the detritus of modern civilization. Photo: Chris Jordan

Paul R. Ehrlich and Anne H. Ehrlich write: Virtually every past civilization has eventually undergone collapse, a loss of socio-political-economic complexity usually accompanied by a dramatic decline in population size. Some, such as those of Egypt and China, have recovered from collapses at various stages; others, such as that of Easter Island or the Classic Maya, were apparently permanent. All those previous collapses were local or regional; elsewhere, other societies and civilizations persisted unaffected. Sometimes, as in the Tigris and Euphrates valleys, new civilizations rose in succession. In many, if not most, cases, overexploitation of the environment was one proximate or an ultimate cause.

But today, for the first time, humanity’s global civilization – the worldwide, increasingly interconnected, highly technological society in which we all are to one degree or another, embedded — is threatened with collapse by an array of environmental problems. Humankind finds itself engaged in what Prince Charles described as ‘an act of suicide on a grand scale’, facing what the UK’s Chief Scientific Advisor John Beddington called a ‘perfect storm’ of environmental problems. The most serious of these problems show signs of rapidly escalating severity, especially climate disruption. But other elements could potentially also contribute to a collapse: an accelerating extinction of animal and plant populations and species, which could lead to a loss of ecosystem services essential for human survival; land degradation and land-use change; a pole-to-pole spread of toxic compounds; ocean acidification and eutrophication (dead zones); worsening of some aspects of the epidemiological environment (factors that make human populations susceptible to infectious diseases); depletion of increasingly scarce resources, including especially groundwater, which is being overexploited in many key agricultural areas; and resource wars. These are not separate problems; rather they interact in two gigantic complex adaptive systems: the biosphere system and the human socio-economic system. The negative manifestations of these interactions are often referred to as ‘the human predicament’, and determining how to prevent it from generating a global collapse is perhaps the foremost challenge confronting humanity.

The human predicament is driven by overpopulation, overconsumption of natural resources and the use of unnecessarily environmentally damaging technologies and socio-economic-political arrangements to service Homo sapiens’ aggregate consumption. How far the human population size now is above the planet’s long-term carrying capacity is suggested (conservatively) by ecological footprint analysis. It shows that to support today’s population of seven billion sustainably (i.e. with business as usual, including current technologies and standards of living) would require roughly half an additional planet; to do so, if all citizens of Earth consumed resources at the US level would take four to five more Earths. Adding the projected 2.5 billion more people by 2050 would make the human assault on civilization’s life-support systems disproportionately worse, because almost everywhere people face systems with nonlinear responses, in which environmental damage increases at a rate that becomes faster with each additional person. Of course, the claim is often made that humanity will expand Earth’s carrying capacity dramatically with technological innovation, but it is widely recognized that technologies can both add and subtract from carrying capacity. The plough evidently first expanded it and now appears to be reducing it. Overall, careful analysis of the prospects does not provide much confidence that technology will save us or that gross domestic product can be disengaged from resource use. [Continue reading…]

2 thoughts on “Can a collapse of global civilization be avoided?”