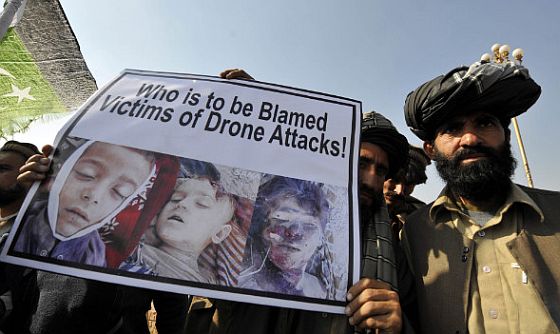 Since President Obama was re-elected on November 6, there have been 15 drone strikes in Pakistan and Yemen, including five strikes since New Year’s Day. This is the White House’s definition of a “light footprint” — a euphemism designed to imply that if the United States refrains from sending armies of occupation to foreign lands, then its military impact on the rest of the world is fundamentally benign.

Neoconservatives who seem to prefer the blunt force of American power and have a nostalgia for “shock and awe” are not impressed with light footprints. The idea that Obama employs a light touch seems designed to appeal to mainstream Democrats who like to believe that if America’s military actions pose no risk to American troops, then America is not at war. Drone strikes can continue, largely ignored by the press, and a public happy to remain ignorant can delude itself that the only people getting killed are “bad guys” and that Obama has a smarter approach to national security than his predecessor.

Assuming their nominations are confirmed, the two new pillars of Obama’s national security policy, John Brennan and Chuck Hagel, will likely further reinforce Obama’s approach which has much more to do with method than doctrine. Hagel will ensure that the troops stay at home while Brennan sends the drones overseas, effectively placing a light footprint on American consciousness and fostering an illusion of peace.

In an interview with Reuters, retired General Stanley McChrystal, who devised the U.S. counterinsurgency strategy in Afghanistan, voiced his concerns about the Obama administration’s practice of remote warfare.

“What scares me about drone strikes is how they are perceived around the world,” he said in an interview. “The resentment created by American use of unmanned strikes … is much greater than the average American appreciates. They are hated on a visceral level, even by people who’ve never seen one or seen the effects of one.”

McChrystal said the use of drones exacerbates a “perception of American arrogance that says, ‘Well we can fly where we want, we can shoot where we want, because we can.'”

Drones should be used in the context of an overall strategy, he said, and if their use threatens the broader goals or creates more problems than it solves, then you have to ask whether they are the right tool.

The Bureau of Investigative Journalism reports: CIA drones killed up to 12 people near Mir Ali, North Waziristan, hours after President Obama announced his nominee for Director of the Agency was John Brennan, his chief counterterrorism advisor and a leading proponent of the drone programme. It was the fourth CIA drone attack in 2013 and the fifth in 12 days. If reports are correct it is the third consecutive attack on a TTP compound. However there were conflicting accounts of the strike. Several agencies said a single target was hit, with Associated Press reporting several missiles ‘slammed into a compound near the Afghan border’ killing eight. However multiple sources said targets in different villages were hit in quick succession. The first strike hit Khasso Khel shortly after midnight, according to Xinhua. Five were killed when eight missiles ‘completely levelled’ a building that subsequently caught fire. Witnesses said the casualty count could rise as they feared people were trapped in the rubble.