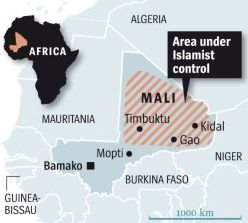 Reuters reports: France carried out air strikes against Islamist rebels in Mali on Friday as it began a military intervention intended to halt a drive southward by the militants who control the country’s desert north.

President Francois Hollande said France would not stand by to watch the rebels push southward. Paris, the leading advocate for foreign intervention in Mali, has repeatedly warned that Islamists’ seizure of the country’s north in April gave them a base to attack the West.

“We are faced with blatant aggression that is threatening Mali’s very existence. France cannot accept this,” Hollande said in a New Year speech to diplomats and journalists.

The president said resolutions by the United Nations Security Council, which in December sanctioned an African-led military intervention in Mali, mean France is acting in accordance with international law.

A military operation had not been expected until September due to the difficulties of training Malian troops, funding the African force and deploying during the mid-year rainy season. However, Mali’s government appealed for urgent military aid from France on Thursday after Islamist fighters took Konna.

The Washington Post adds: Konna lies about 45 miles north of Mopti, which is the northernmost headquarters for Malian government military operations. French officials expressed fear the Islamist forces, if they continue their advance, could capture Mopti and from there push all the way south to Bamako, the capital more than 300 miles to the southwest.

“Their objective obviously was the control of all Mali in order to turn it into a terrorist state,” said Foreign Minister Laurent Fabius.

Against that background, France on Friday ordered nonessential French citizens to leave the country and international aid organization in Bamako began evacuating their foreign employes.

The Malian army has been largely in disarray since a bungled coup d’etat in March led by Capt. Amadou Haya Sanogo. Following the coup, Tuareg guerrilla forces in the Azawad National Liberation Movement, led by Col. Mohamed Ag Najim, took control of the area with little opposition from the leaderless army. On April 6 they declared independence for “the Islamic State of Azawad,” the Tuareg name for the region.

Northern Mali’s Tuareg population, ethnically different from the black residents of Bamako and the south, have long sought independence or at least greater autonomy. A number of accords have been reached over the years, some brokered by neighboring Algeria, only to end up dead letter.

Najim’s forces were fresh from years of serving in Libya as an adjunct to Col. Muammar Gaddafi’s army. As a result, they were trained and well armed, according to some reports with surface-to-air missiles from Gaddafi’s arsenal.

In addition, Najim was aided by the Ansar al-Din al-Salafiya, a fundamentalist Islamist Tuareg group with close ties to al-Qaeda in the Islamic Maghreb and led by Iyad Ag Ghali. Before the summer was over, the three main branches of AQIM had filed into the region, along with other extremist groups, and pushed Najim’s mainly secular forces aside, setting up what amounted to an Islamist outland.