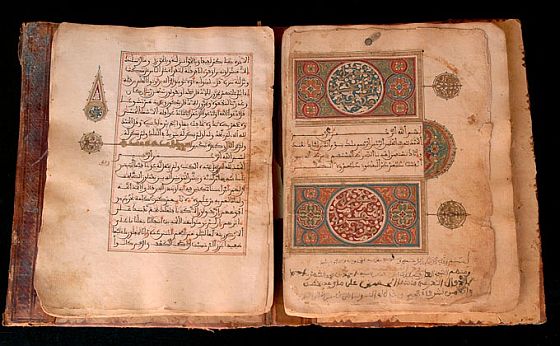 A Quran from the 12th century in Timbuktu

Jonathan Jones writes: The reported destruction of two important manuscript collections by Islamist rebels as they fled Timbuktu is an offence to the whole of Africa and its universally important cultural heritage. Like their systematic destruction of 300 Sufi saints’ shrines while they held Timbuktu at their mercy, it is an assault on world heritage comparable with the demolition of the Buddhas of Bamiyan by the Taliban in 2001.

The literary heritage of Timbuktu dates back to the 15th and 16th centuries when the gold-rich kingdoms of Mali and Songhai traded across the Sahara with the Mediterranean world. It took two months for merchant caravans to cross the desert, and while gold and slaves went north, books were going south.

In his Description of Africa, published in 1550, the traveller Leo Africanus marvels that in the bustling markets of Timbuktu, under the towers of its majestic mosques, the richest traders were booksellers.

They were selling manuscripts by Arab scholars on everything from astronomy and arithmetic to Islamic law, as well as mystical texts on Sufism, the otherworldly, saintly style of faith that the al-Qaida-affiliated Ansar Dine finds so offensive. [Continue reading…]

In a 2010 BBC documentary, Aminatta Forna tells the story of the lost libraries of Timbuktu.