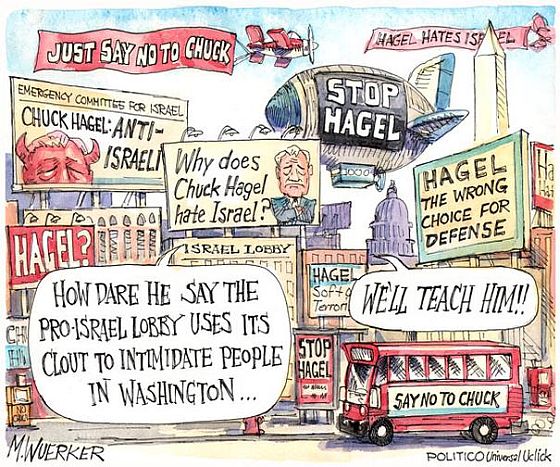 The cartoon above, which appeared in Politico a few days ago, is pretty straightforward in identifying who is behind the campaign against Chuck Hagel’s nomination as defense secretary: the Israel lobby. (It’s worth noting, Politico is a fairly lobby-friendly publication, so the willingness of its editors to name names in this case has more to do with stating what is blindingly obvious rather than springing from some desire to ‘out’ the lobby.)

How does the New York Times cover the same story? Assign it to a reporter who apparently doesn’t believe the Israel lobby exists.

In Jim Rutenberg’s mind, the campaign against Chuck Hagel is a story about the effects of the Supreme Court decision, Citizen’s United. You have to go all the way down to paragraph nineteen in his report before Rutenberg mentions the Emergency Committee for Israel (creators of the anti-Hagel ChuckHagel.com website which doesn’t even get mentioned in the article).

Even though Rutenberg refers to Sheldon Adelson as a prominent backer of the anti-Hagel campaign, he only comes up after mentioning major conservative groups like Americans for Prosperity and Crossroads GPS who are not involved in the fight against Hagel.