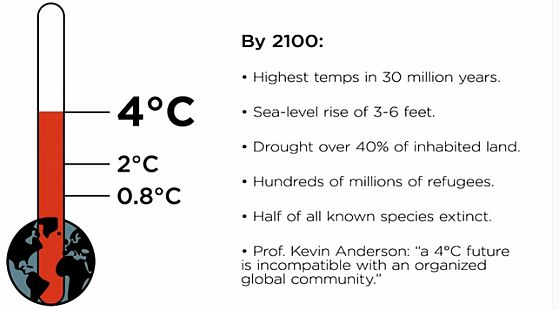 Jeff Goodell writes: Among all the tests President Obama faced in his first term, his biggest failure was climate change. After promising in 2008 that his presidency would be “the moment when the rise of the oceans began to slow and our planet began to heal,” President Obama went silent on the most crucial issue of our time. He failed to talk openly with Americans about the risks of continuing to pump greenhouse gases into the atmosphere, failed to put political muscle behind legislation to cap carbon pollution, failed to meaningfully engage in international climate negotiations, failed to use the power of his office to end the fake “debate” about the reality of global warming and failed to prepare Americans – and the world – for life on a rapidly­ warming planet. It was as if the biggest challenge humanity has ever faced became a political inconvenience for the president once he was elected.

Now Obama gets another shot at it. “The politics of global warming are changing fast,” says Kevin Knobloch, the president of the Union of Concerned Scientists. Thanks to a year of extreme weather and Hurricane Sandy, a large majority of Americans – nearly 90 percent – favor action on global warming, even if there are economic costs. The U.S. economy is on the road to recovery and no longer offers an excuse for inaction. Big Coal, traditionally the loudest voice against climate action, has been weakened by a glut of cheap natural gas and the economic viability of solar and wind power. China has new political leadership that appears open to discussing a global agreement to cut carbon. And Obama himself has nothing left to lose. “The president has a big opportunity here,” says former Vice President Al Gore. “This is a moment when he can expand the ideas of what’s possible.”

Obama’s record on climate issues is not all bad. In his first term, Gore points out, the president made significant strides in promoting clean energy. “He accomplished more than any president before him,” says Gore. Obama’s biggest move was to dramatically boost fuel standards for cars and trucks, which will cut climate-warming pollution by 6 billion metric tons in the course of the program. Thanks in part to billions of dollars in federal stimulus, wind energy doubled in the last four years, while solar installations increased sixfold. By the end of the decade, in fact, America is on track to cut its carbon pollution by as much as 17 percent, meeting the long-term goal Obama pledged at the Copenhagen climate talks in 2009.

The trouble is, Obama’s accomplishments are small-bore when weighed against the immense scale of the climate crisis. 2012 was the hottest year on record in the continental U.S. The polar ice caps are melting faster than scientists predicted; wildfires torched the American West; extreme drought parched 60 percent of the country’s farms, jacking up food prices. Then came Hurricane Sandy, which devastated New York and New Jersey. “Climate change has gone from something that happens in a computer model to something that people can see in their own backyards,” says Frances Beinecke, president of the Natural Resources Defense Council. “It is a global crisis playing out before our very eyes. And it’s not happening in slow motion.”

Obama isn’t blind to the threat. “He understands this is the central problem his administration has to deal with in the second term,” says John Po­desta, who headed up Obama’s transition team in 2008. “He knows the judgment of history is riding on this.” At a press conference shortly after his re­election, Obama admitted that “we hadn’t done as much as we need to” to address climate change, and promised a “wide-ranging conversation with scientists, engineers and elected officials” to make sure that global warming is “not a problem we’re passing on to future generations that’s going to be very expensive and very painful to deal with.”

But if the president is planning any bold action during his second term to combat global warming, there’s little evidence of it. “I want to do something on climate,” he told a friend and former White House staffer after the election, “but I don’t know what.” Before his 2008 inauguration, Obama solicited ideas for combating climate change from top environmentalists and energy executives. This time around, there have been no such meetings, and the president has not telegraphed any ideas on climate change to Congress. “If he has a larger strategy on this, I haven’t seen it,” says the chief of staff to a leading Democratic senator. One Democratic donor and climate activist who visited the White House in December was told point-blank by Heather Zichal, the White House adviser on energy and climate, that the president has no plans to propose any climate legislation to Congress, knowing that House Republicans would shoot it down.

“I think the president understands the climate crisis intellectually, but he has not had the ‘holy shit’ moment you arrive at when you think about this deeply enough,” says a leading climate advocate who has had private conversations with Obama about global warming. Instead of talking about the risks of climate change during the campaign, Obama touted an “all of the above” energy plan that was a soft-porn version of “drill, baby, drill.” Under Obama, in fact, oil and gas production have soared: Last year, U.S. oil production grew by 766,000 barrels a day, the largest jump ever, and domestic oil production is at its highest level in 15 years. [Continue reading…]

1 thought on “Obama: “I want to do something on climate, but I don’t know what.””