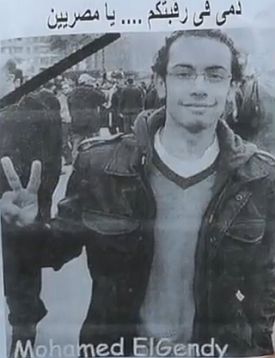 The Associated Press reports: An Egyptian opposition party on Monday claimed police tortured one of its members to death, electrocuting him and beating him repeatedly on the head — the latest case alleging police brutality in a crackdown on anti-government protesters.

Mohammed el-Gindy, a 28-year-old activist, died of his wounds early Monday at a Cairo hospital after he was “tortured to death,” the Egyptian Popular Current party said in a statement.

El-Gindy went missing for several days after protesting on Jan. 27 in Cairo’s Tahrir Square. The protesters are opposed to Egypt’s Islamist President Mohammed Morsi’s policies and are pressing him to amend the constitution, which was drafted by a panel dominated by Islamists and approved in a public referendum last year.

Party spokeswoman Mona Amer said she saw el-Gindy’s body and that it carried marks of torture. She said he was electrocuted, had broken ribs and a “cord appeared to have been wrapped around his neck.” A medical report cited brain hemorrhage as cause of death.

Amnesty International: Almost every girl and woman – regardless of age, social status or choice of attire – who has walked the streets or taken public transport in Cairo, has experienced some form of verbal or physical sexual harassment.

This isn’t new. For years, Egyptian women’s rights activists and others have called on the authorities to recognize the seriousness of the problem.

There needs to be a fundamental shift in institutionalized attitudes that discriminate against women.

The Egyptian authorities must introduce legal reforms, prosecute perpetrators and address root causes, because the plight of women who have experienced sexual violence has been ignored.

Blame is placed on the victims for being dressed “indecently,” or for daring to be present in “male” public spaces.

The horrific testimonies emerging following protests commemorating the second anniversary of the “25 January Revolution” have brought to light how violent mob sexual attacks against women have happened, but have rarely been brought to public attention.

International Crisis Group: It is difficult to know which is most dangerous: the serious uptick in street violence; President Morsi’s and the Muslim Brotherhood’s serial inability to reach out to the rest of the political class inclusively; or the opposition clinging to the hope of some extraneous event (demonstrations, foreign pressure, judicial rulings or military intervention) allowing it to gain power while bypassing arduous compromise and politics. They are tied of course: the president’s cavalier treatment of the constitution-writing process and the judiciary and the opposition’s lethargic approach to politics and rejection of Islamist legitimacy alike have eroded the authority of state institutions. This encourages in turn unrest and contributes to the economic slide. Together, these heighten risks of a complete breakdown of law and order. For two years, political factions repeatedly have failed to reach consensus on basic rules of the game, producing a transition persistently threatening to veer off the road. It is past time for the president and opposition to reach an accommodation to restore and preserve the state’s integrity.

Since President Mubarak’s ouster, the level of violence has ebbed and flowed, yet each new wave brings the country closer to tipping point. Already, some police officers, beleaguered by attacks on their headquarters, are considering removing their uniforms and going home; there is talk of brewing discontent among Central Security Forces, the riot control police; and criminal gangs along with looters profit from the chaos. There are new shocking images of police brutality. Many young Egyptians increasingly appear disillusioned with electoral politics, and some are drawn to anarchical violence.

The situation is made worse by deteriorating economic conditions. As foreign currency reserves decline, the government finds it ever more difficult to prop up the Egypt’s pound or maintain fuel and food subsidies. One should not be surprised to see larger segments of the population joining in socio-economic riots. By current trends, Egypt could find itself in a vicious cycle of economic under-performance and political instability, the one fuelling the other.