Der Spiegel reports: The global war on drugs has cost billions and taken countless lives — but achieved little. The scant results finally have politicians and experts joining calls for legalization. Following the journey of cocaine from a farm in Colombia to a user in Berlin sheds light on why.

“Pablo Escobar said to me: ‘One shot to the head isn’t enough. It has to be two shots, just above the eyes.'”

Jhon Velásquez, nicknamed “Popeye,” is sitting on a white plastic chair in the prison yard. “You can survive one shot, but never two. I cut up the bodies and threw them in the river. Or I just left them there. I often drove through Medellín, where I kidnapped and raped women. Then I shot them and threw them in the trash.”

Three guards are standing next to him. He is the only prisoner in the giant building. The watchtower, the security door systems, the surveillance cameras — it’s all for him. The warden of the Cómbita maximum-security prison, a three-hour drive northeast of the Colombian capital Bogotá, has given Popeye one hour to tell his story.

The experience is like opening a door into hell.

Popeye was the right-hand man of Pablo Escobar, head of Colombia’s Medellín cartel. Until his death in 1993, Escobar was the most powerful drug lord in the world. He industrialized cocaine production, controlled 80 percent of the global cocaine trade and became one of the richest people on the planet. The cartel ordered the killings of 30 judges, about 450 police officers and many more civilians. As Escobar’s head of security, Popeye was an expert at kidnapping, torture and murder.

Velásquez acquired the nickname Popeye while working as a cabin boy in the Colombian navy. He kidnapped Andrés Pastrana, the then-candidate for mayor of Bogotá and later president. He obtained the weapon that was used to fatally shoot Colombian presidential candidate Luis Carlos Galán in 1989. He was involved in a bombing attack that was intended to kill former Colombian President César Gaviria. Popeye, acting on the orders of Escobar, El Patrón, even had his beauty-queen girlfriend Wendy murdered.

“I’ve killed about 250 people, and I cut many of them into pieces. But I don’t know exactly how many,” Popeye says. “Only psychopaths count their kills.”

Popeye is a pale, 50-year-old man with a shrill voice — a psychopath who doesn’t count his kills.

The longer Popeye talks — about his murders, the drug war and the havoc he and Escobar wreaked and that is currently being repeated in Mexico — the less important my prepared questions about this war become. I realize that I might as well throw away my notepad, because it all boils down to one question: How can we stop people like you, Popeye?

He pauses for a moment before saying: “People like me can’t be stopped. It’s a war. They lose men, and we lose men. They lose their scruples, and we never had any. In the end, you’ll even blow up an aircraft because you believe the Colombian president is on board. I don’t know what you have to do. Maybe sell cocaine in pharmacies. I’ve been in prison for 20 years, but you will never win this war when there is so much money to me made. Never.”

I’m sitting face to face with a killer: Popeye, an evil product of hell. And I’m afraid that the killer could be right.

The drug war is the longest war in recent history, underway for more than 40 years. It is a never-ending struggle against a $500 billion (€378 billion) industry. [Continue reading…]

See infographic on the U.S. failed war on drugs.
(Click on image to enlarge.) 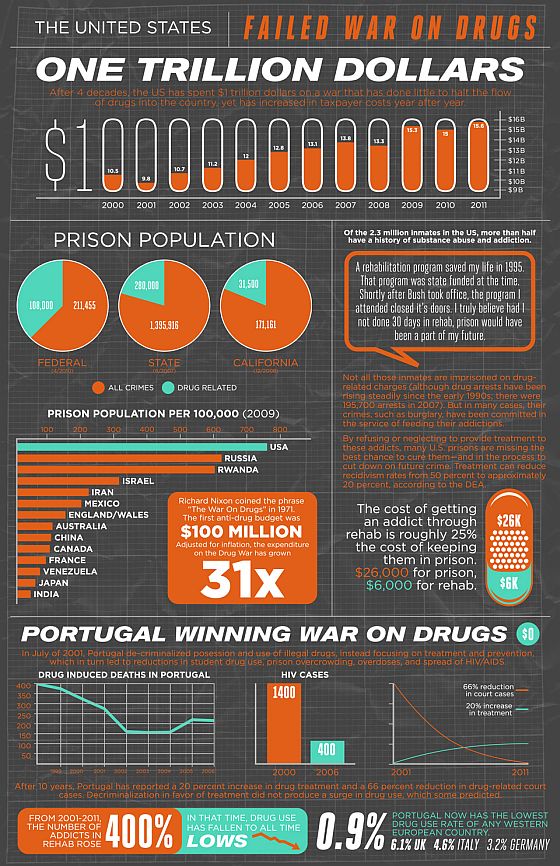