Christian Science Monitor reports: Over the past century, global average temperatures appear to have risen faster than at any time since the end of the last ice age 11,300 years ago, and perhaps longer. Meanwhile, the magnitude of the increase has been unmatched in at least the past 4,000 years.

Researchers say those are the implications of a new study that uses natural stand-ins for thermometers to trace temperature trends back to the beginning of the current warm, interglacial period. Significantly, the study’s findings suggest the current warming trend cannot be explained by some forms of naturally occurring temperature variability, a lingering issue in the debate over the impact of human activity on global warming.

The main trigger for the current warming trend, especially since the middle of the last century, has been rising emissions of heat-trapping carbon dioxide as people burn fossil fuels and change land-use patterns, researchers say.

Although other so-called paleoclimate records reach farther back into geological time, the team focused on the Holocene epoch, in which human civilizations emerged and evolved.

“To our knowledge, based on this reconstruction, the rate of change today is unprecedented” in the Holocene, says Shaun Marcott, an atmospheric scientist at Oregon State University who led a team formally reporting the results in Friday’s issue of the journal Science. Indeed, it may be unprecedented in the past 22,000 years, he adds, when previous paleoclimate research he and his colleagues have conducted is taken into account. 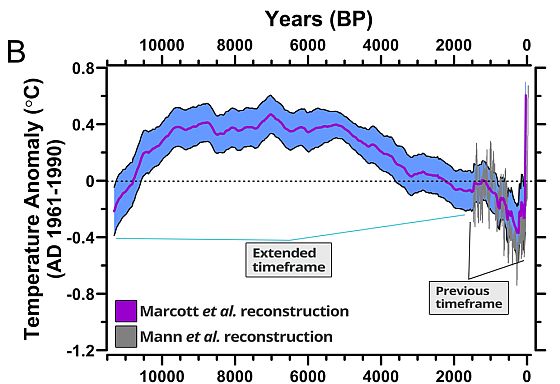