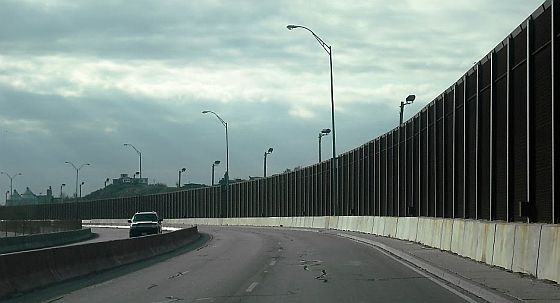 There is a sense in which America conjures a metaphysical absolute space — a space in which an infinite distance separates this country from everything and everyone outside its borders.

Ciudad Juárez — which is literally a stone’s throw from El Paso in Texas — could be as far away as North Waziristan.

So long as fences — both physical and cognitive — can be raised high enough, no one need concern themselves with what happens on the outside.

Jeremy Relph writes: The interior of the school bus is awash in blue light, lumbering through the Villa Esperanza neighborhood on the outskirts of Ciudad Juárez, Mexico, on a chilly November evening. Tinny rap music in Spanish plays on a cell phone. The kids ride the bus in their uniforms: white polo shirts with green collars and khakis. The guys favor lots of gel; the girls, ponytails. Most students will have walked home from school in the dark, which is often when things go wrong. We are in Km 29, which is Artistas Asesinos territory, a street gang aligned with the Sinaloa Cartel.

The bus leaves the paved highway and rumbles over hard dirt roads in the desert. It’s a slow ride. A girl gets off the bus and picks her way over the uneven dirt beside the road. The bus driver turns off the lights, plunging the landscape into darkness but for the glow of Juárez. When he turns the lights back on, she is running.

You accept the evil here in faith. Faith, after all, is belief in the unseen. It’s the opposite of hope but the same muscle. You don’t see it, but you know it’s there. We eat tacos al pastor later that evening, back in the city. We hear war stories. A friend mimics the bang bang of shooting, making a rifle with his hands. A patron behind me, waiting for his takeout, wears a gun on his hip. The restaurant is half full, and our waiter becomes inattentive, hurrying to another table. Our friend realizes that seated at the table behind us are members of a local cartel comprising dirty cops, La Linea. The patron waiting on his takeout is a state cop. In the Juárez of yesterday, this might have lead to a restaurant littered with dead bodies. Cuidad Juárez is changing.

The drug war in Juárez saw some 10,000 men, women, and children die since 2007 — 359 homicides reported in October 2010 alone — a disproportionate chunk of the nearly 60,000 reported for the rest of the country. At stake: access to the American market, worth close to $40 billion. That money, and the violence that inevitably comes with it, moves beyond class boundaries — society itself fell apart over the past six years here. Extreme violence became totally normal, a fact of everyday life.

Throughout the war, cartels actively recruited young people. Teenagers — Los Ninis (ni estudian ni trabajan, neither work nor study) — were the most vulnerable, some drawn to quick money and status. And now it’s considered done. Some credit could go to former President Felipe Calderón’s Todos Somos Juárez’s program (We Are All Juárez), introduced in 2010. The federal government invested $263 million in 2010 and $138 in 2011. Security ate up 18% of the money, the rest being pushed to other areas like health, education, and social development. The results, on paper, are impressive, though flawed. Some feel the cessation of violence has more to do with the Sinaloa cartel winning the war or the combatants merely taking a breather. Regardless, as of last year, Juárez is no longer the world’s murder capital, a distinction passed on to San Pedro Sula, Honduras; now it’s No. 19.

Juárez struggles to provide for its 1.5 million residents, and nowhere will its failings be more evident in the future than in schools and the next generation of young people, who came of age during the drug wars and don’t know much else. The system meant to look out for them is broken, but, amazingly, they — and the adults charged with looking after them — are not. [Continue reading…]