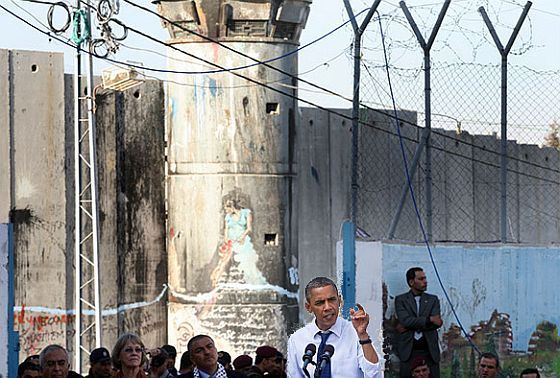 Haaretz reports President Obama will be visiting the Church of the Nativity in Bethlehem during his visit to Israel and the West Bank in a few days.

Four years ago Pope Benedict made the same visit and drew attention to Israel’s apartheid wall by giving a speech in its shadow.

“In a world where more and more borders are being opened up — to trade, to travel, to movement of peoples, to cultural exchanges — it is tragic to see walls still being erected,” Benedict said.

Obama could do the same — at least we can imagine what that would be like and how it would go down in history, like JFK declaring “Ich bin ein Berliner” or Reagan challenging the Soviet Union to “Tear down this wall!”

But what’s he going to do instead? Stand in front of an Iron Dome missile battery for a photo-op alongside Prime Minister Benjamin Netanyahu and President Shimon Peres.