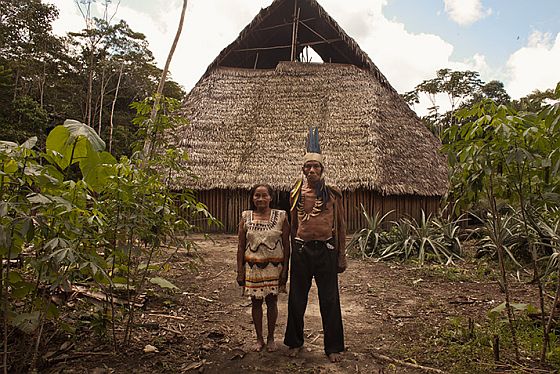 Jitoma Safiama, 70 -- seen here with his wife Rosita Garcia, a Muynane, in front of their maloca -- is a shaman and chief of a small subtribe of Uitotos, descendants of those who were chased by the rubber barons from their original lands around 1925.

Joshua Hammer writes: On a cloudless afternoon in the foothills of the Andes, Eliana Martínez took off for the Amazon jungle in a single-engine Cessna 172K from an airstrip near Colombia’s capital, Bogotá. Squeezed with her in the tiny four-seat compartment were Roberto Franco, a Colombian expert on Amazon Indians; Cristóbal von Rothkirch, a Colombian photographer; and a veteran pilot. Martínez and Franco carried a large topographical map of Río Puré National Park, 2.47 million acres of dense jungle intersected by muddy rivers and creeks and inhabited by jaguars and wild peccaries — and, they believed, several isolated groups of Indians. “We didn’t have a lot of expectation that we’d find anything,” Martínez, 44, told me, as thunder rumbled from the jungle. A deluge began to pound the tin roof of the headquarters of Amacayacu National Park, beside the Amazon River, where she now serves as administrator. “It was like searching for the needle in the haystack.”

Martínez and Franco had embarked that day on a rescue mission. For decades, adventurers and hunters had provided tantalizing reports that an “uncontacted tribe” was hidden in the rainforest between the Caquetá and Putumayo rivers in the heart of Colombia’s Amazon. Colombia had set up Río Puré National Park in 2002 partly as a means of safeguarding these Indians, but because their exact whereabouts were unknown, the protection that the government could offer was strictly theoretical. Gold miners, loggers, settlers, narcotics traffickers and Marxist guerrillas had been invading the territory with impunity, putting anyone dwelling in the jungle at risk. Now, after two years’ preparation, Martínez and Franco were venturing into the skies to confirm the tribe’s existence — and pinpoint its exact location. “You can’t protect their territory if you don’t know where they are,” said Martínez, an intense woman with fine lines around her eyes and long black hair pulled into a ponytail.

Descending from the Andes, the team reached the park’s western perimeter after four hours and flew low over primary rainforest. They ticked off a series of GPS points marking likely Indian habitation zones. Most of them were located at the headwaters for tributaries of the Caquetá and the Putumayo, flowing to the north and south, respectively, of the park. “It was just green, green, green. You didn’t see any clearing,” she recalled. They had covered 13 points without success, when, near a creek called the Río Bernardo, Franco shouted a single word: “Maloca!”

“Donde? Donde?” — Where? Where? she yelled excitedly.

Directly below, Franco pointed out a traditional longhouse, constructed of palm leaves and open at one end, standing in a clearing deep in the jungle. Surrounding the house were plots of plantains and peach palms, a thin-trunked tree that produces a nutritious fruit. The vast wilderness seemed to press in on this island of human habitation, emphasizing its solitude. The pilot dipped the Cessna to just several hundred feet above the maloca in the hope of spotting its occupants. But nobody was visible. “We made two circles around, and then took off so as not to disturb them,” says Martínez. “We came back to earth very content.”

Back in Bogotá, the team employed advanced digital technology to enhance photos of the maloca. It was then that they got incontrovertible evidence of what they had been looking for. Standing near the maloca, looking up at the plane, was an Indian woman wearing a breechcloth, her face and upper body smeared with paint.

Franco and Martínez believe that the maloca they spotted, along with four more they discovered the next day, belong to two indigenous groups, the Yuri and the Passé — perhaps the last isolated tribes in the Colombian Amazon. Often described, misleadingly, as “uncontacted Indians,” these groups, in fact, retreated from major rivers and ventured deeper into the jungle at the height of the South American rubber boom a century ago. They were on the run from massacres, enslavement and infections against which their bodies had no defenses. For the past century, they have lived with an awareness — and fear — of the outside world, anthropologists say, and have made the choice to avoid contact. Vestiges of the Stone Age in the 21st century, these people serve as a living reminder of the resilience — and fragility — of ancient cultures in the face of a developmental onslaught. [Continue reading…]