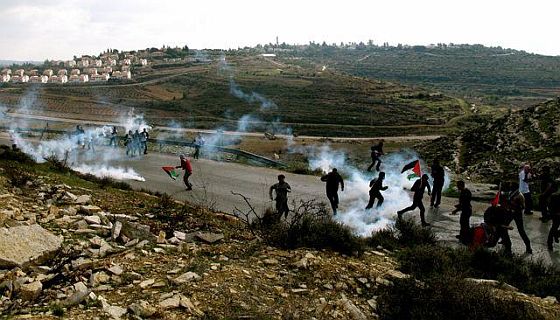 Ben Ehrenreich writes: On the evening of Feb. 10, the living room of Bassem Tamimi’s house in the West Bank village of Nabi Saleh was filled with friends and relatives smoking and sipping coffee, waiting for Bassem to return from prison. His oldest son, Waed, 16, was curled on the couch with his 6-year-old brother, Salam, playing video games on the iPhone that the prime minister of Turkey had given their sister, Ahed. She had been flown to Istanbul to receive an award after photos of her shaking her fist at an armed Israeli soldier won her, at 11, a brief but startling international celebrity. Their brother Abu Yazan, who is 9, was on a tear in the yard, wrestling with an Israeli activist friend of Bassem’s. Nariman, the children’s mother, crouched in a side room, making the final preparations for her husband’s homecoming meal, laughing at the two photographers competing for shots from the narrow doorway as she spread onions onto oiled flatbreads.

On the living-room wall was a “Free Bassem Tamimi” poster, left over from his last imprisonment for helping to organize the village’s weekly protests against the Israeli occupation, which he has done since 2009. He was gone for 13 months that time, then home for 5 before he was arrested again in October. A lot happened during this latest stint: another brief war in Gaza, a vote in the United Nations granting observer statehood to Palestine, the announcement of plans to build 3,400 homes for settlers, an election in Israel. Protests were spreading around the West Bank.

That night, the call came at about 7:30. Twenty people squeezed into three small cars and headed to the village square. More neighbors and cousins arrived on foot. (All of Nabi Saleh’s 550 residents are related by blood or marriage, and nearly all share the surname Tamimi.) Then a dark Ford pulled slowly into the square, and everyone fell silent.

Bassem, who is 45, stepped out of the car, straight-spined, his blue eyes glowing in the lamplight. He seemed a little thinner and grayer than the last time I saw him, in July. He hugged and kissed his eldest son. Ahed was next, then one by one, in silence, Bassem embraced family and friends, Palestinian activists from Ramallah and Jerusalem, Israeli leftists from Tel Aviv. When he had greeted everyone, he walked to the cemetery and stopped in front of the still-unmarked grave of his brother-in-law Rushdie, who was shot by Israeli soldiers in November while Bassem was in prison. He closed his eyes and said a quick prayer before moving on to the tomb of Mustafa Tamimi, who died after being hit in the face by a tear-gas canister in December 2011.

Back at home, Bassem looked dazed. Nariman broke down in his arms and rushed outside to hide her tears. The village was still mourning Rushdie’s death, but the young men couldn’t keep up the solemnity for long. They started with little Hamoudi, the son of Bassem’s cousin, tossing him higher and higher in the air above the yard. They set him down and took turns tossing one another up into the night sky, laughing and shouting as if they never had anything to grieve. [Continue reading…]