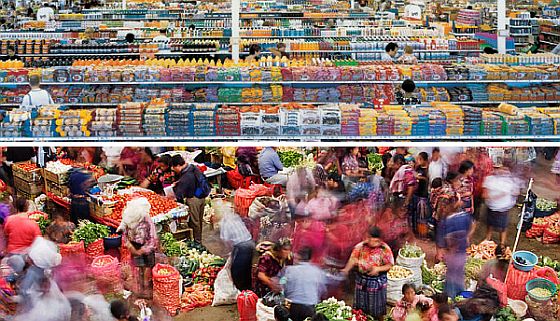 Richard Rodriguez writes: We Americans have long told ourselves that we are a God-favored people, a churchgoing, moral people. But last week when the old cardinals of Roman Catholicism looked for the future of their church, they looked south. And what we Americans heard, as if for the first time, is that the spiritual center of Christianity is in the Southern Hemisphere, not with us in the north.

How could that be?

Despite the drug addiction of Americans — an addiction second to none that has destabilized Latin America from Bolivia to Colombia to Mexico — we assume the moral high ground in the Americas. We long have regarded Latin Americans as a morally lazy race, corrupt in their civic life, tolerant of Marxism one day, fascism the next. Now we learn that the beating heart of Christianity is in the south. World Catholicism is centered there. And Protestantism, too, surges throughout Latin America.

We Americans built a wall to separate ourselves from Latin Americans and their disrespect regarding our laws. A number of us tell pollsters or listeners of talk radio that we would deport the millions of Latin Americans who are illegally here, and their children bleating about their “dreams.” Many Americans declare they do not want illegality rewarded in any way.

In the long political debate over illegal immigration, religion and morality have rarely been mentioned by those in power, except by disgraced Cardinal Roger Mahony in Los Angeles. In immigrant rights parades, it’s true, one did see nuns and people carrying crosses, as in a religious procession. But right-wing commentator Pat Buchanan, famously a Catholic, described illegal immigrants from Latin America as a greater threat to our union than Al Qaeda. There was something evil coming from the south.

What went unsaid on talk radio and on the floor of Congress was that were it not for Latin American immigrants, here legally and illegally, many churches in the U.S. would be as empty as Notre Dame cathedral in Paris. And not just Catholic churches.

As Rodriguez goes on to note, the American left is largely uninterested in religion — and I expect that lack of interest is reflected among visitors to this site.

Even so, the strength of religion should interest everyone, irrespective of their religious or political orientation. And those of us with no faith should hesitate to assume that our lack of faith makes us better off.

One of the reasons secularists look down on the religious is out of the conviction that scientific realism will inevitably triumph over religious superstition. But as Rodriguez points out, the decline of religion is not resulting in a demographic rise of secularism. Why? Because as religious belief declines, so does the drive to reproduce.

This probably says less about mere differences in orientation towards life and an afterlife than it does about differences between the irreligious rich and the religious poor.

As people become more immersed in their pursuit of careers, a tension develops between the demands of raising a family and the pursuit of personal achievement outside the family. Simultaneously, the more economic independence the individual acquires, the less reliant he or she becomes on the mutual support provided by family, community, and church. Put simply, the less we need others, the less we procreate.

As we maximize our individual autonomy, we collectively wither. The price for liberating ourselves from religion is that we end up with weaker, atomized societies. The better we can take care of ourselves, the less we care about others.

Having left religion behind, one can’t easily turn back.

Some people want to create churches for the faithless — a goal I can support in spirit. Yet what will provide the glue that holds together such communities? In our resolute individualism, where do we find common ground when there is no ready substitute for shared faith?

We secularists imagine we have an ideological advantage because we believe in this life rather than any other and because we rely on science rather than scripture, but we fall down by over-investing in the material world.

“Lay not up for yourselves treasures upon earth, where moth and rust doth corrupt, and where thieves break through and steal.”

That can be read as an injunction to the faithful to fix their attention on rewards in heaven, but it also says something to those of us with no faith: that there are false promises attached to most of the material things we can acquire.

Pope Francis has said he wants a poor church, for the poor. As an archbishop he condemned the gross inequalities in his native Argentina and from the perspective of secularists concerned with social justice, these may sound like a call for the redistribution of wealth. The poor must be raised out of poverty.

But remember: this comes from a priest who took a vow of poverty. Granted, there’s a huge difference between poverty that is chosen and poverty from which one hungers to escape, but for those who take such a vow, this is not an exercise in self-abnegation; it’s about the liberating effect of recognizing that ones needs are few.

Ironically, in societies with material abundance, the terms ‘poor’ and ‘needy’ are interchangeable. Yet the more easily we can meet our material needs, the more difficult it becomes to differentiate between needs and desires. Indeed needs met, rather than resulting in contentment, often fuel larger desires.

The top of the ladder of acquisition, rather than being occupied by people who are serenely fulfilled is instead the abode of those who acquire perverse desires — like wanting to live in $200 million apartments.

There’s no disputing that in a world where there are clearly enough resources to meet everyone’s basic needs, no one should be dying of hunger, lacking care for treatable diseases, or living in miserable squalor. But another poverty goes unnamed — one that afflicts the rich and causes desire to metastasize, producing concentrations of wealth that serve little good even for those in their possession.

What those protected by military-trained guards, bulletproof glass, and panic rooms, fail to see, is that rather having been supremely successful in acquiring so much, they have instead become the prisoners of their own wealth.

But worse than that, the affliction of excessive wealth is also a curse on others. Not only does the wasteful aggregation of resources necessitate deprivation for others, but the status attached to wealth undermines the dignity of those who possess little.

The reconfiguration of wealth the world needs, cannot be confined to the distribution of material resources, but requires a redefinition of the meaning of wealth.

Only when those who believe they have so much, start to see how much loss acquisition incurs, can a deeper reordering of human values begin.