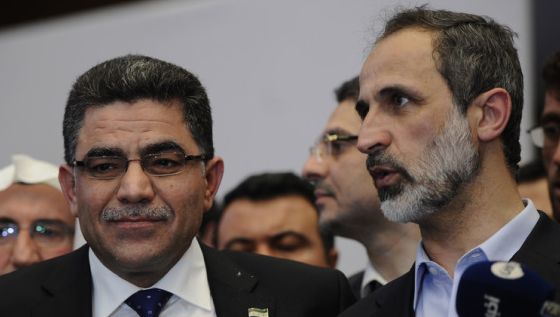 The Associated Press reports: Syria’s rebel coalition has elected as its prime minister Ghassan Hitto, a little-known American-educated IT manager and Islamic activist who will head an interim government to administer the areas seized by opposition forces from the regime troops of President Bashar Assad.

Hitto received 35 votes out of 48 ballots cast by the opposition Syrian National Coalition’s 63 active members during a meeting in Istanbul. The results were read aloud by coalition member Hisham Marwa to applause from a few dozen of his colleagues who had waited until after 1am to hear the results.

“I miss my wife and children and I look forward to seeing them soon,” said Hitto, who has lived in the United States for decades and recently moved from Texas to Turkey to help co-ordinate aid to rebel-held areas.

When asked what his interim government’s first priority would be, Hitto said he planned to give a speech later on Tuesday outlining his plans.

Hitto did not receive a resounding mandate from the coalition, of which he is not a member. Of the group’s 63 active members only 48 voted. Four cast blank ballots and Hitto received 35 of the remaining votes.

Hitto was born in Damascus, the Syrian capital, in 1963, according to his official resumé provided by the coalition. Little known in Syria, Hitto has lived in the United States for more than two decades, most recently in Texas. He has academic degrees from Purdue University in Indiana and Indiana Wesleyan University.

He worked for a number of different technology companies and helped run a Muslim private school called the Brighter Horizons Academy. He is also a founding member of the Muslim Legal Fund of America, which was founded to give legal aid to Muslims following the 9/11 terrorist attacks. He is married with four children.

Coalition members hope the new government will unite the rebels fighting Assad’s forces on the ground and provide services to Syrians living in rebel-held areas, many of which have been battered by the country’s civil war and suffer acute shortages of food, electricity and medical services.

But the new government faces huge challenges, starting with its ability to gain recognition from rebel factions on the ground.