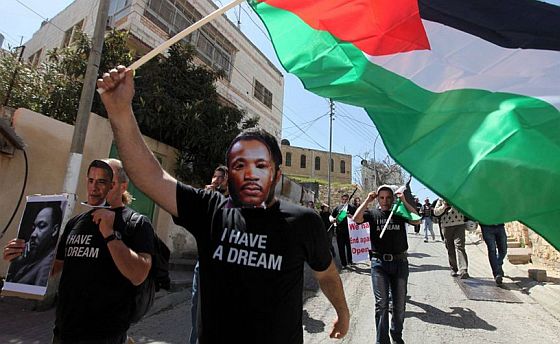 Ali Gharib reports: Call it a welcoming committee. Around noon here, just as Barack Obama’s plane was slated to touch down in Israel, a group of Palestinians donned masks bearing the American president’s likeness and took to Shuhada Street in Hebron, in the southern West Bank. Joined by international and Israeli activists, all wearing tee-shirts that read “I have a dream,” they caught the army unawares. Within minutes, five Israeli soldiers swarmed the group of just over 20 protesters, detaining seven or eight of them (reports remain unconfirmed), including the two Palestinians leading the protests. Their crime? Walking down the street.

“Obama, come here to Hebron,” shouted Issa Amro, a local protest leader, in English, just as a scrum formed between the demonstrators and a handful of soldiers, who rushed to the scene. “I am Obama,” he added as a young settler, perhaps 12-years-old, snatched the cardboard Obama mask from his face, crumpling it into his back pocket. Within minutes, Amro was shoved to the street. He rose briefly only to be knocked down again, before being dragged off into detention.

Segregation is too light a word to describe what happens in Hebron, a city of less than 200,000 that feels like ground zero of the Israeli occupation. Home to Jewish holy site, the Tomb of the Patriarchs, Israeli settlers began arriving in droves after Israel’s takeover of the West Bank in 1967 (joining a small, longtime community that coexisted peacefully here for more than a century). The city is now dotted by small settlements, each home no matter how remote guarded by a soldier from the Israeli army. Now, several hundred settlers live in directly in the city. Eventually, settlers seized Shuhada Street, narrow road that used to house a local market. Eventually, in perhaps the starkest act of discrimination here, much of the road was closed to Palestinians altogether in 1994. Palestinian life in the area has suffered dramatically since.

The protesters had marched down from a local house, joining a cadre of others and walking with Palestinian flags and a banner reading, “We have a dream/ Apartheid in Hebron/ Open Shuhada Street.” Other demonstrators held up photos of Martin Luther King, Jr.—some wore masks of his likeness, too—and Frederick Douglas. The protests took on King’s spirit of non-violence: no demonstrator hurled so much as an insult, let alone a rock. Just as they passed into the section where the road becomes “sterile”—meaning Palestinians are not allowed to walk—a group of five soldiers confronted them, attempting to form a barricade. A settler emerged from a nearby building and moved a white Volkswagen panel van across the street, bottlenecking the pedestrian traffic. But a few of the protesters broke through, only to be stopped a few meters down the road. [Continue reading…]