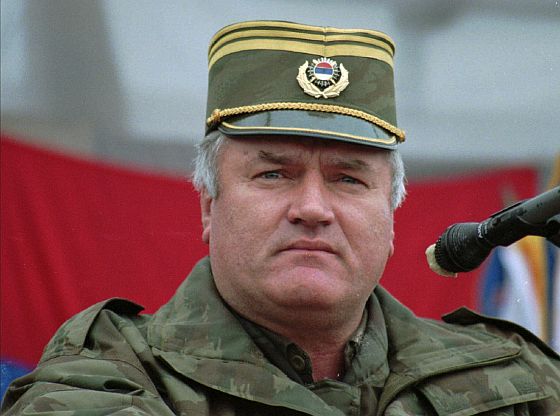 The Guardian reports: The men and women who helped hide Ratko Mladic through his many years as a fugitive saw him as a Serb hero. But just in case their loyalty should waver, they were presented with a gift: photographs of their children. The implication was clear: if we can shoot them with a camera, we can shoot them by other means as well.

The Bosnian Serb general, now on trial in The Hague for genocide and other crimes against humanity, eluded capture for 14 years, with the help of the Serbian military, then his wartime lieutenants, then his family. But the common factor throughout was fear.

The stocky, ruddy-faced, ex-artillery officer made a career out of terror. He oversaw the three years of the Sarajevo siege and the daily attrition of its residents by shelling and sniping. He was also at the Muslim enclave in Srebrenica in July 1995, reassuring panicked women captives their loved ones would be safe, while his men were rounding up and slaughtering 8,000 men and boys. It was the worst atrocity Europe has witnessed since the Nazi era.

After the war, Mladic withdrew to Han Pijesak in eastern Bosnia, where the communists had built a reinforced bunker to resist invasion. But in 1997 when Nato troops finally began looking for war criminals, he slipped across the river Drina from the separatist Bosnian Serb republic to Serbia proper, where President Slobodan Milosevic, the mastermind behind the “ethnic cleansing” of non-Serbs, was ready to offer shelter. But Mladic’s days as a wanted man had only just begun.

From interviews with relatives, court records as well as the accounts of Serbian and international investigators who ultimately tracked Mladic down in 2011, the Guardian has been able to piece together a detailed picture of the general’s years in hiding.

While the ability to evade his pursuers for so long burnished his folk-hero image among nationalists as a Serbian Scarlet Pimpernel, the reality was more mundane and brutal. He stayed free by trusting fewer and fewer people, living in increasing isolation and squalor, ensuring silence with the threat of force. [Continue reading…]