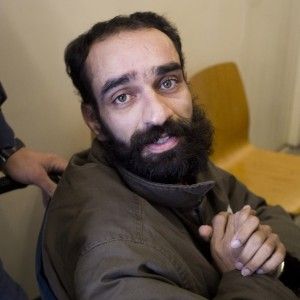 Samer Issawi has been on hunger strike for eight months.

Since July last year, Samer Issawi has been in prison. His ‘crime’ was that he left Jerusalem and entered the West Bank to go and get his car fixed. The terms of his earlier release under the Gilad Shalit prisoner-swap deal were that he not enter the West Bank. Since August he has been on hunger strike.

Last week he wrote a message which included this challenge to Israeli intellectuals, writers, lawyers and journalists, associations, and civil society activists:

I’m looking for an intellectual who is through shadowboxing, or talking to his face in mirrors. I want him to stare into my face and observe my coma, to wipe the gunpowder off his pen, and from his mind the sound of bullets, he will then see my features carved deep in his eyes, I’ll see him and he’ll sees me, I’ll see him nervous about the questions of the future, and he’ll see me, a ghost that stays with him and doesn’t leave.

You may receive instructions to write a romantic story about me, and you could do that easily after removing my humanity from me, you will watch a creature with nothing but a ribcage, breathing and choking with hunger, loosing consciousness once in a while.

And, after your cold silence, Mine will be a literary or media story that you add to your curricula, and when your students grow up they will believe that the Palestinian dies of hunger in front of Gilad’s Israeli sword, and you would then rejoice in this funerary ritual and in your cultural and moral superiority.

In a collective act of contemptuous hand-wringing, several Israeli authors and scholars called on Issawi to end his hunger strike in their hope that he will accept an offer of exile rather than die of starvation.

Haaretz reports: The public appeal came in response to a message written by Issawi and posted on Facebook, in which he asked Israelis to intervene on his behalf. The security prisoner has refused solid food for eight months and is now in Kaplan Hospital in Rehovot because of his deteriorating medical condition.

The group, which includes literary luminaries A. B. Yehoshua, Amos Oz and Yehoshua Kenaz, offered their sympathy but suggested his death would hamper efforts to settle the conflict between Israel and the Palestinians.

“We have read about your hunger strike with agony,” the message said. “We are horrified by your deteriorating condition. We feel that the suicidal act you are about to commit will add another facet of tragedy and desperation to the conflict between the two peoples – a conflict that peace-seekers on both sides wish to end.

“Please, Samer Issawi, don’t pile more despair on the despair already in existence. Give yourself hope, thus strengthening the hope within all of us,” it said.

The authors noted that there are “new encouraging signs that the negotiations between the sides will resume,” adding that these measures may secure Issawi’s release alongside other Palestinians imprisoned in Israel.

“We urge you to stop your hunger strike and choose life, because we are committed to tirelessly striving toward peace between the two peoples, who will live side by side forever in this country,” the authors concluded.

Writer Eli Amir, who has signed the letter, told Haaretz the message is not meant to be “patronizing.”

“We have heard rumors recently that the government is proposing to deport him to one of the European states,” he said. “[Issawi] has asked why public officials, authors and everyone else is standing by while he is starving and turning into a skeleton. We are trying to help him regardless of what he has done or his opinions.”

In 2002, Issawi was sentenced to 26 years in prison after being convicted on several counts of attempted murder, possession of weapons, arms trade, illegal military training and belonging to a terrorist group.

He was one of the 1,027 prisoners released from Israeli prison in 2011 as part of the deal that secured the freedom of Gilad Shalit, but was re-arrested last August for violating the terms of his release. Shortly after his return to prison, he began a hunger strike, and now receives only liquids fortified with vitamins, which are keeping him alive. The doctors treating him say his condition has deteriorated drastically and there is a real threat to his life.

Earlier on Saturday, police detained two left-wing activists who tried to enter Kaplan Hospital with the intent to visit him.

1 thought on “Israeli writers give cowardly response to Samer Issawi”