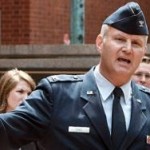 Morris Davis, former chief prosecutor for the military commissions at Guantánamo, writes: I am going to say something I have not said as often as I would have liked: I agree with President Obama. Despite indications to the contrary – such as fighting me tooth and nail in court the past three years (and counting) over my firing by the Library of Congress for writing op-eds critical of his and President Bush’s detainee policies – he apparently came to the same realization I had several years ago that, in his words, “we’ve got to close Guantánamo.”

At a press conference on Tuesday, the president said that Guantánamo is unnecessary to keep America safe; it is expensive and inefficient; it diminishes the standing of the United States in the international community; it hampers cooperation with allies on counterterrorism efforts; and it serves as a recruitment tool for extremists. He is right on all counts. How, then, could anyone find an upside to perpetuating the Guantánamo fiasco?

Well, some see advantage in pandering to fear, particularly politicians on the far right of the ideological spectrum. They argue that anyone who would consider moving the “crazy bastards” out of Guantánamo and closing it is soft on terrorism. They are wrong: they are the ones who are soft … in the head and the spine. American law enforcement agencies, prison systems and judicial processes have proven themselves quite capable of dealing with “crazy bastards” of all types. They can handle a Khalid Sheikh Mohammed. It is time to stop wasting the taxpayers’ money and squandering what credibility America has left keeping a folly afloat. [Continue reading…]