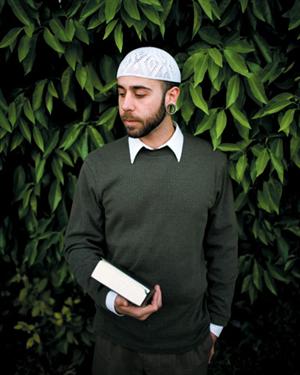 The Huntsville Times reports: Terry Holdbrooks Jr., 29, wears the beard of a bald Amish guy, the tattoos of a punk kid, and the twitchy alertness of a military policeman. Take him to a restaurant, and he’ll choose the chair with its back against the wall. Take his photo, and he’ll prefer to look away from the camera.

Part of that wariness Holdbrooks learned while guarding detainees from 2003 to 2004 at Guantanamo Bay, the U.S. holding tank for military prisoners on the southeastern point of Cuba.

And part of that wariness he developed after he converted to Islam while stationed at Guantanamo after months of midnight conversations with the Muslim detainees – a conversion that prompted several of his fellow soldiers to try several times to talk some “sense” into him so he wouldn’t “go over to the enemy,” as they put it.

Holdbrooks told the story of his conversion and of his observations of the controversial detention center to an audience of about 80 people at the Huntsville Islamic Center in Huntsville Saturday night, May 25, 2013. The camp, he said, tramples on every human right the U.S. has said it is against. The current hunger strike by 102 of the 166 prisoners has crossed 100 days. Many of those men were cleared to go home five or six years ago, Holdbrooks said. Their home countries tell their lawyers the U.S. won’t release them, and the U.S. tells them their home countries won’t receive them.

“They’ve lost hope. They’ve decided it’s better to die,” Holdbrooks said. “One of them is down to 70 pounds.”

Holdbrooks is traveling with Khalil Meek, a co-founder and executive director of the Texas-based Muslim Legal Fund of America. They are raising money for that non-profit civil rights organization, which helps pay for legal help for Muslims who are American citizens and who have been accused of vague crimes or placed on no-fly lists and other restrictions under the increasingly broad “anti-terrorism” provisions.

Even more than raising money for legal defense, Holdbrooks said, he wants to stir Americans to action. Holdbrooks’ self-published account of his experience at Guantanamo, “Traitor?,” was published this month. It’s available for sale online at www.GtmoBook.com.

“I tell this story and I wrote the book so idiot-simple that anyone could read and understand that the existence of Guantanamo is something to be ashamed of,” Holdbrooks said. [Continue reading…]