James Bamford writes: Inside Fort Meade, Maryland, a top-secret city bustles. Tens of thousands of people move through more than 50 buildings—the city has its own post office, fire department, and police force. But as if designed by Kafka, it sits among a forest of trees, surrounded by electrified fences and heavily armed guards, protected by antitank barriers, monitored by sensitive motion detectors, and watched by rotating cameras. To block any telltale electromagnetic signals from escaping, the inner walls of the buildings are wrapped in protective copper shielding and the one-way windows are embedded with a fine copper mesh. 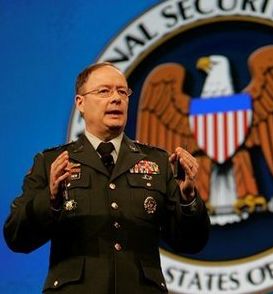 This is the undisputed domain of General Keith Alexander, a man few even in Washington would likely recognize. Never before has anyone in America’s intelligence sphere come close to his degree of power, the number of people under his command, the expanse of his rule, the length of his reign, or the depth of his secrecy. A four-star Army general, his authority extends across three domains: He is director of the world’s largest intelligence service, the National Security Agency; chief of the Central Security Service; and commander of the US Cyber Command. As such, he has his own secret military, presiding over the Navy’s 10th Fleet, the 24th Air Force, and the Second Army.

Alexander runs the nation’s cyberwar efforts, an empire he has built over the past eight years by insisting that the US’s inherent vulnerability to digital attacks requires him to amass more and more authority over the data zipping around the globe. In his telling, the threat is so mind-bogglingly huge that the nation has little option but to eventually put the entire civilian Internet under his protection, requiring tweets and emails to pass through his filters, and putting the kill switch under the government’s forefinger. “What we see is an increasing level of activity on the networks,” he said at a recent security conference in Canada. “I am concerned that this is going to break a threshold where the private sector can no longer handle it and the government is going to have to step in.” [Continue reading…]