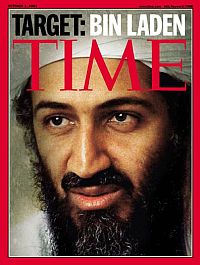 Shortly after 9/11, Osama bin Laden appeared on the cover of Time magazine. What later became an iconic image — the embodiment of evil, global terrorist #1, the face of Islamic extremism, or however else Americans came to view this face — did at the time show a man with an indisputable look of serenity.

Since the icons of terrorism were at that juncture still in the process of being manufactured, America’s first glimpses of Public Enemy Number One portrayed — dare I say it — a rather Christ-like figure.

Even though this was still a nation very much in shock, the appearance of a flattering image of the prime suspect behind the attacks was apparently something that America could handle.

Twelve years later and Rolling Stone’s use of a flattering image of Dzhokhar Tsarnaev is now supposedly beyond the pale.

Michelle Malkin, outraged that the magazine’s choice of cover image shows that its “editors are as muddle headed as ever about our war with Islam,” suggests that Rolling Stone is telling America’s youth that Tsarnaev “is just like you!”

And she’s probably right — not on the issue of her war with Islam, but on the idea that Tsarnaev should be seen as an American youth.

This isn’t a land of saints and to belong to the ranks of American youth does not preclude the possibility of doing some awful things before even reaching adulthood. Does ‘cool’ connote any particular virtues? Not that I’ve noticed.

If there’s one thing worth highlighting more than anything else about Tsarnaev, it is precisely his normality. He doesn’t seem to have been unhinged like James Eagan Holmes, Jared Lee Loughner, or Adam Lanza.

Is it disturbing that an ordinary American kid could be involved in a bombing that killed three people and injured many more? Sure.

But that doesn’t mean we now have to plunge into denial and pretend that he wasn’t really an American kid or that there are horns concealed under his locks of hair or that his name or religion makes him foreign.

Osama bin Laden had some Christ-like features and Dzhokhar Tsarnaev looks a bit like Jim Morrison.

Maybe the problem isn’t the images — it’s the simplistic ideas we have about terrorism.

5 thoughts on “Damn Rolling Stone — for what?”