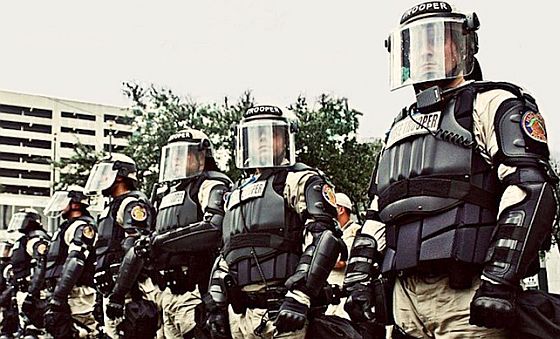 Radley Balko writes: On Jan. 4 of last year, a local narcotics strike force conducted a raid on the Ogden, Utah, home of Matthew David Stewart at 8:40 p.m. The 12 officers were acting on a tip from Mr. Stewart’s former girlfriend, who said that he was growing marijuana in his basement. Mr. Stewart awoke, naked, to the sound of a battering ram taking down his door. Thinking that he was being invaded by criminals, as he later claimed, he grabbed his 9-millimeter Beretta pistol.

The police say that they knocked and identified themselves, though Mr. Stewart and his neighbors said they heard no such announcement. Mr. Stewart fired 31 rounds, the police more than 250. Six of the officers were wounded, and Officer Jared Francom was killed. Mr. Stewart himself was shot twice before he was arrested. He was charged with several crimes, including the murder of Officer Francom.

The police found 16 small marijuana plants in Mr. Stewart’s basement. There was no evidence that Mr. Stewart, a U.S. military veteran with no prior criminal record, was selling marijuana. Mr. Stewart’s father said that his son suffered from post-traumatic stress disorder and may have smoked the marijuana to self-medicate.

Early this year, the Ogden city council heard complaints from dozens of citizens about the way drug warrants are served in the city. As for Mr. Stewart, his trial was scheduled for next April, and prosecutors were seeking the death penalty. But after losing a hearing last May on the legality of the search warrant, Mr. Stewart hanged himself in his jail cell.

The police tactics at issue in the Stewart case are no anomaly. Since the 1960s, in response to a range of perceived threats, law-enforcement agencies across the U.S., at every level of government, have been blurring the line between police officer and soldier. Driven by martial rhetoric and the availability of military-style equipment—from bayonets and M-16 rifles to armored personnel carriers—American police forces have often adopted a mind-set previously reserved for the battlefield. The war on drugs and, more recently, post-9/11 antiterrorism efforts have created a new figure on the U.S. scene: the warrior cop—armed to the teeth, ready to deal harshly with targeted wrongdoers, and a growing threat to familiar American liberties. [Continue reading…]