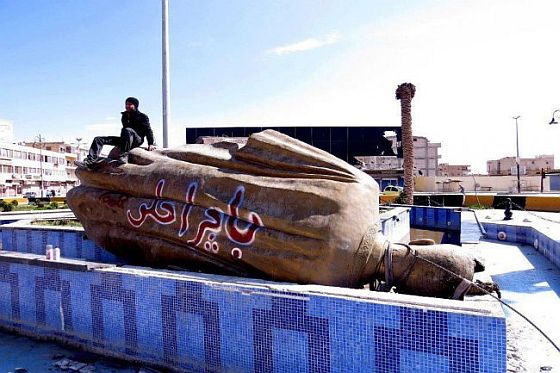 The Syrian playwright, Mohammed Al Attar, describes the complex relationships between each of the militias and the civilian society in Al Raqqa, 100 miles east of Allepo, the first regional capital in liberated Syria to have experienced some degree of autonomy.

Even though the Assad regime has no control over the city on the ground, it persists in bombing, much of it in the form of explosive barrels, dropped randomly by helicopters. “The explosive barrel is the epitome of meaningless death in a war deliberately launched by the regime against its revolutionary subjects. In the eyes of those being bombed from the air, the missiles fired from fighter jets are a far more honourable weapon. They may be more devastating, but at least you don’t have to sit there waiting for them to drop on you, pointlessly.”

Al Raqqa defies the bombardment in a number of ways. Those who remain (and those who have returned) continue their desperate struggle for daily bread, a struggle that is no simple matter these days. There are a very few public service providers that still receive their salaries from the central government (Communications and Electricity) and others whose salaries have been either totally suspended or that have been paid just once in the last six months (Water and Health for example). These providers of vital services continue to work on a voluntary basis with support from the local council, which itself has extremely limited resources. The other problem currently facing Al Raqqa’s residents is the agricultural sector. There are a number of pressing questions surrounding the fate of limited-income farmers. How can they meet the cost of seed and fertilizer now that the admittedly limited government subsidies have been cut off? The fertilizer that is being imported from Turkey is prohibitively expensive. How will the purchase and distribution of crops be regulated? The civil authorities find themselves burdened with new and weighty responsibilities that the Syrian political opposition has completely failed to deal with. The political opposition has no presence on the ground in Al Raqqa. Effective institutions affiliated with the National Coalition or other groups are nowhere to be found. Certain of its representatives make fleeting visits, but that is all. Confronted with all manner of pressing challenges, it is the local council that shoulders the lion’s share of the burden. There are some praiseworthy initiatives, such as an effort to establish a police force, and a very limited number of these policemen have begun to enforce a traffic system, but its work is limited by the new force’s lack of training, equipment and support for its role. Indeed, it is a decisive test of the city’s ever-present armed brigades and their willingness to keep out of civil affairs. The local council has also revived the city’s municipal offices and started working on keeping the city clean.

But hope rests on the youth and the various civil society blocs they created following the liberation of the city. There are currently forty-one civil society organizations in Al Raqqa and though the scope and effectiveness of their activities varies hugely from one to another, they provide incontrovertible evidence of Syrians’ desire to restore an effective role to civil society. There are groups for rights activists, for the independent media, for teachers and students, for activists from the non-violent protest movement, for those working in development, small-scale economic projects and emergency relief. There are even groups for the theatre and the arts. Some of those who work in these groups were detained two or three times by the regime prior to liberation. It is they who give you hope. Their voices carry a weight that cannot be ignored. Moreover, these groups play a role in maintaining dynamic and flexible relations with the armed groups. These relationships are vital for keeping channels of communication open between the two sides, channels in which personal contacts are of supreme importance. All these forms of interaction are vital to the process of identifying and isolating those who communicate poorly or outright refuse all communication (ISIS [Islamic State in Iraq and Syria], for instance). These days, Al Raqqa’s residents increasingly tend to distinguish between those who bear arms to continue their struggle against the regime and those who do so to impose a dictatorship of another kind or to triumph in purely local power struggles. All these types are present in Al Raqqa today. Most of the time, public reception is the determining factor in one party gaining the ascendency over others.

Despite their weariness and the difficulties of their daily lives (all of them serious obstacles blocking the revolutionary’s movement’s return to full strength) there are clear indications that the city’s civilian population is unwilling to tolerate these new dictatorial practices. Souad, a primary school teacher, leaves home every evening to demonstrate in various locations around the city, carrying signs that reject ISIS’s behavior and demanding the release of all those they have detained. Souad often goes to stand outside their headquarters, an act of open defiance, prompting some of its members to try and dissuade her from her what she is doing.

On the evening of August 10, in response to the harassment of civilians by members of the Ahrar Al Sham Movement [one of the strongest Syrian Islamist militias and a rival of ISIS], residents gathered together spontaneously, their assembly becoming a fully-fledged demonstration against the actions of the Movement’s members. Some members of the Movement then opened fire to disperse the demonstrators, and the city seethed with rage, only for the Movement to issue a statement hours later in which they declared that the members responsible for the original grievance had been dismissed and those of them who had fled were being pursued to bring them to justice.

A few days later on August 14, when ISIS detonated its car bomb about the headquarters of the Ahfad Al Rasul Brigade in the old train station, civilians attempted to intervene to remove the wounded and allow passage to ambulances. Once more they were dispersed with gunfire from ISIS fighters.

These events take place against a backdrop of rising anger at the ongoing abductions of well-known figures in the city, to which was added the rumour that Father Paolo [a Jesuit priest] had been murdered by his abductors. The rumour was later denied, but confirming any information about the group’s prisoners remains impossible due to the inaccessibility of sources within the group itself. The most recent information concerning Father Paolo was leaked by a mujahid who had left the group and informed those close to him that he had seen Paolo alive at the Al Baath Dam (which is under ISIS’s control) before he was transported to another headquarters in the village of Al Akirshi, near Al Raqqa.

These successive events appear to be indicators of a deepening enmity between Al Raqqa’s civilians and the armed brigades, ISIS in particular. The civilians do not seem to be in a position of strength when it comes to these types of confrontations, yet at the same time they have never before been so determined and set on continuing their struggle. Every single person I met saw themselves as part of a popular and radical revolt that has not yet ended. They had removed a totalitarian and tyrannical regime from their city. Today, they see this achievement as just one step along the long and hard road to their goal: a free, just and proud nation…And they do not look like they will be giving up any time soon.