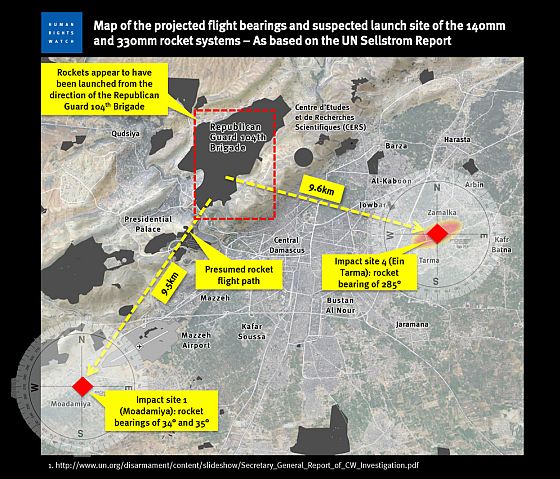 Human Rights Watch: The UN inspectors investigating the chemical weapons attack on two suburbs in Damascus last month weren’t supposed to point the finger at the party responsible for the killings. But even so, the Sellstrom report revealed key details of the attack that strongly suggest the government is to blame, and may even help identify the location from which the Sarin-filled rockets that killed hundreds of people on August 21 were fired.

In appendix 5 of their report, after describing the size and structure of two rocket delivery systems used, they go one step further and actually reveal the direction some of the rockets likely came from. Using standard field investigative techniques examining the debris field and impact area where the rockets struck, the report provides precise azimuths, or angular measurements, that allow us to work out the actual trajectory of the rockets.

Connecting the dots provided by these numbers allows us to see for ourselves where the rockets were likely launched from and who was responsible.

The two attack locations are located 16 kilometers apart, but when mapping these trajectories, the presumed flight paths of the rockets converge on a well-known military base of the Republican Guard 104th Brigade, situated only a few kilometers north of downtown Damascus and within firing range of the neighborhoods attacked by chemical weapons.

According to declassified reference guides, the 140mm artillery rocket used on impact site number 1 (Moadamiya) has a minimum range of 3.8 kilometers and a maximum range of 9.8 kilometers. The Republican Guard 104th Brigade is approximately 9.5 km from the base. While we don’t know the firing range for the 330mm rocket that hit impact site number 4, the area is only 9.6km away from the base, well within range of most rocket systems. [Continue reading…]