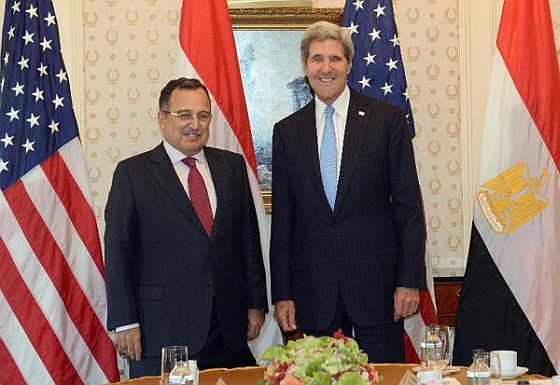 “Things are moving forward in Egypt,” is the message officials are taking to the UN this week. Egypt’s rulers following the military coup in July want to placate Washington’s nominal concerns about democracy with this assurance:

Events for the most part are on the right track in Egypt, despite inevitable hiccups; the state is committed to a transitional process that will result in a referendum on an amended – and hopefully less controversial – constitution, and a full democratic process will be pursued.

Having ousted President Mohamed Morsi, killed hundreds of members of the Muslim Brotherhood and imprisoned thousands more, the effort to destroy the movement shows few signs of restraint.

“The plan is to drain the sources of funding, break the joints of the group, and the dismantle podiums from which they deliver their message,” a senior Egyptian security official tells Associated Press, using language reminiscent of then defense minister Yitzhak Rabin’s “broken bones” campaign as Israel attempted to crush the first Palestinian intifada.

Reuters reports: Murad Ali says he was put in a foul-smelling cell on death row, sleeping on a concrete floor, and denied light and human contact after his arrest in Egypt’s crackdown on the Muslim Brotherhood. “It was as dark as a grave,” he wrote in a letter addressed to friends and family and seen by Reuters.

The army-backed authorities deny claims Brotherhood leaders have been mistreated, and there is no way to independently verify such accounts; but people who have spoken to them in jail say some have been kept in similar conditions for days on end.

Their relatives describe it as a bid to break their spirit – a measure of the severity of the campaign against the group that was swept from power by the military on July 3, when Mohamed Mursi, a Brotherhood member, was deposed.

Analysts say it points to a state effort to weaken the Brotherhood by decapitating it. The movement says it has up to one million members and it is one of the most influential Islamist groups in the Middle East.

The New York Times reports: An Egyptian court on Monday issued an injunction dissolving the Muslim Brotherhood and confiscating its assets, escalating a broad crackdown on the group less than three months since the military ousted its ally, President Mohamed Morsi.

The ruling, by the Cairo Court for Urgent Matters, amounts to a preliminary injunction shutting down the Brotherhood until a higher court renders a more permanent verdict. The leftist party Tagammu had sought the immediate action, accusing the Brotherhood of “terrorism” and of exploiting religion for political gain. The court ordered the Brotherhood’s assets to be held in trust until a final decision.

If confirmed, the ban on the Brotherhood — Egypt’s mainstream Islamist group — would further diminish hopes of the new government’s fulfilling its promise to restart a democratic political process that would include Mr. Morsi’s Islamist supporters. For now, though, it effectively formalizes the suppression of the Brotherhood that is already well under way.

Since Mr. Morsi’s ouster, the new government appointed by Gen. Abdul-Fattah el-Sisi has killed more than 1,000 Brotherhood members in mass shootings at protests against the takeover and arrested thousands more, including almost all of the group’s leaders. Security services have closed offices of the group and its political party in cities around the country. Members are now sometimes afraid to speak publicly by name for fear of reprisals.

Abdullah Al-Arian writes: The military’s intervention reflects a longstanding desire among elements of the former regime to rid Egypt of its revolutionary movement and destroy any progress toward the establishment of democratic institutions.

If those intentions were not obvious in their posturing before July 3, they have certainly become clear since then. In the six-week long crisis that followed, there was no genuine attempt by the military-appointed interim government to resolve the situation in a manner that would allow Egypt to remain on the revolutionary track or even to avoid unnecessary bloodshed. The total war strategy employed against the Muslim Brotherhood and its supporters was meant to emulate the repression of prior eras, but on an even wider scale, due to the perception of widespread public support for this move.

Staying true to form as a movement with strong internal discipline and the capacity to mobilize, the Muslim Brotherhood employed the only means at its disposal, a non-violent mass protest, to oppose the clear attempts to overturn its democratic gains and destroy its presence in society for the foreseeable future. In fact, the Rabaa protests took the group’s leadership back to a place with which it is all too intimately familiar, the perpetual victimhood upon which it has built its eight-decade legacy. Far from the challenges of governance, the anti-coup protests recalled the common theme of standing up to tyranny and repression that marked the Muslim Brotherhood’s experiences under successive authoritarian rulers.

The military’s disproportionate response to the protests, unprecedented in Egypt’s modern history, reflects an attempt to establish a new political and social order that would not only marginalize the Muslim Brotherhood, but would destroy it altogether. The wholesale adoption of the “war on terror” discourse by the state and its media arm is not only intended to make the alarmingly high number of casualties seem justifiable. As with the Bush era policy of the same name, this paradigm is meant to convince those watching from the sidelines that the Islamic activist impulse that has been part and parcel of Egyptian society for a century could conceivably be eradicated.

The muted response from the liberal, leftist, and progressive currents within society suggest that this tactic has worked, with most groups hoping that the wave of violent repression is not indicative of a wider trend aimed at rolling back the gains of the revolution. Beyond wishful thinking, however, there is little to challenge the notion that the counter-revolution is in full swing.

Wishful thinking is in evidence today with the creation of a new anti-Brotherhood and anti-military group called the The Way of the Revolution Front (Facebook).