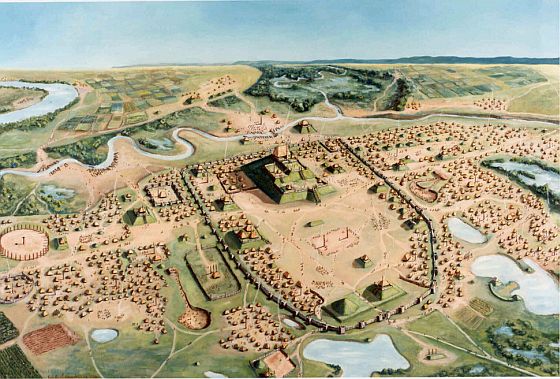 Annalee Newitz writes: One thousand years ago, in the place where St. Louis, Missouri now stands, there was once a great civilization whose city center was ringed with enormous earthen pyramids, vast farmlands, and wealthy suburbs. For hundreds of years it was the biggest city in North America. Then a mysterious fire changed everything.

The city that once existed in St. Louis’ current footprint is known today as Cahokia, and its creators are commonly called the Mound Builders because of the 120 or so enormous mounds they left behind. Shaped much like the stone pyramids of the Maya civilization to the south, these mounds rose up hundreds of feet, and were often built on top of tombs. At their summits were ceremonial buildings made from wood and thatch. Unfortunately, many of these magnificent creations were destroyed in the nineteenth century when St. Louis was built. Below, you can see one of the only remaining pyramids, known as Monk’s Mound.

The first evidence of a settlement in the Cahokia area is from the year 600 CE, at a time when the Maya civilization would have been at its peak. But it wasn’t until after the largest cities of the Maya began to fall in the 1000s that Cahokia came into its own. It’s estimated that the city center held as many as 15,000 people (making it comparable in size to European cities of the same era), and reached the height of its productivity between roughly 1000-1300 CE. [Continue reading…]