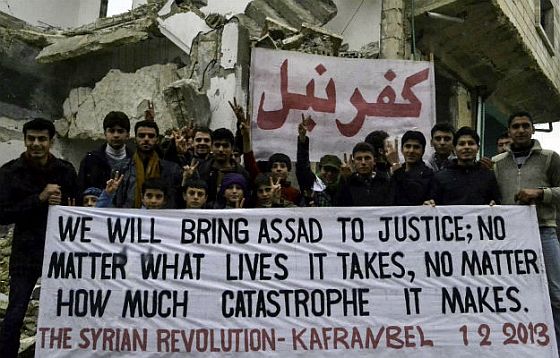 Amal Hanano traveled to Kafranbel in northern Syria, famous for its witty posters and banners, where she met 40-year-old Raed Faris and his partner, 33-year-old Ahmad Jalal, the creative couple behind the banners.

The people of the town had been coming to Faris for months. They begged him to stop creating the antagonistic banners and organizing the protests that had attracted international attention. They blamed the protests for the regime’s air raids that were devastating the town.

This is the twisted logic that plagues people in Syria. Facing continuously escalating violence, many civilians have directed blame toward the revolution. Obviously, you can’t blame the Syrian regime for being vicious and relentless — that’s just what it is, and always was. It was the revolution that should have known its limits: In many Syrians’ eyes, the revolution had brought death and destruction, invited unwanted extremists, and steered the country to the point of no return. Returning to silence, they reasoned, was the way to end the nightmare that had been unleashed on their country.

Faris tried to compromise. He moved the protests to an inconspicuous side street, away from the main square. He banned children from attending the Friday protests and changed the set time of the gathering. Nothing stopped the residents’ complaints. And so after a protest on July 15 that featured a banner dedicated to Trayvon Martin’s family, he stopped.

“Without popular support, we can’t do this anymore,” Faris said. At first he was angry — especially when the air raids did not stop. On July 27, during the holy month of Ramadan, the bombs fell at sunset while the town broke its fast. Several people were killed in the now-silent town. And still the people blamed the protests.

“While I search for your mistakes and you search for mine, while we search for someone to blame, we realize that we have lost because we no longer trust each other,” Faris wrote on his Facebook page on July 31. “Our revolution needs us all. Let us search for each other, for victory is nothing but grasping each others’ hands in solidarity.”

After a few weeks, Faris’s anger waned. The time off had given him time to reflect. He stopped focusing on what the world wanted to hear and see. Instead, he began to listen to the town, and worked on a plan to regain his lost legitimacy.

One August evening, activists set up screens, projectors, and sound systems in five different public spaces across Kafranbel. For two hours, news was broadcast on the screens — a report from Al Jazeera, a compilation of YouTube videos, and a special local news broadcast produced by the media team. Men stopped on the street to watch. They pulled up chairs and lined the sidewalks. Some had not watched the news for months. Others had not seen the YouTube videos at all.

After two years of projecting Kafranbel to the world, Faris had brought back the world into Kafranbel.

The media team started to put together the broadcasts every day. They compiled videos of the early protests, of the banners shared around the word, and stories about Kafranbel’s martyrs. Faris and his team ignored calls from journalists who asked for new banners and cartoons. They didn’t even create artwork or organize a protest after the horrific Aug. 21 chemical weapons attack on the eastern Damascus suburbs.

After a few weeks of these outdoor events, people requested that the protests and banners return. They regained their pride in their town’s defiance. And so on Aug. 30, Kafranbel reclaimed its revolutionary role.

Isolationism — which many Syrians view as President Barack Obama’s foreign policy with regards to their home country — works both ways. Many activists inside and outside Syria realize that there is no longer a reason to convince the world to action. No one is coming to save Syria.

The collective message of Kafranbel’s body of work is the opposite of isolationism. It’s an awakening to the world after decades of neglect and forced isolation by the Assad regime. Sadly, Syrians have realized their costly awakening has come to an unwelcoming world.

Over the last two and a half years, Kafranbel’s banners projected the same message over and over: “Listen to us. Watch us. Respond.”

The message is slightly different now. Children and men alike proudly walk the streets of Kafranbel. They chant for their brave town. They are no longer hiding on side streets or standing on a stage for the world. Instead, their message is: “We are here. We are not going anywhere. Watch us if you wish.”