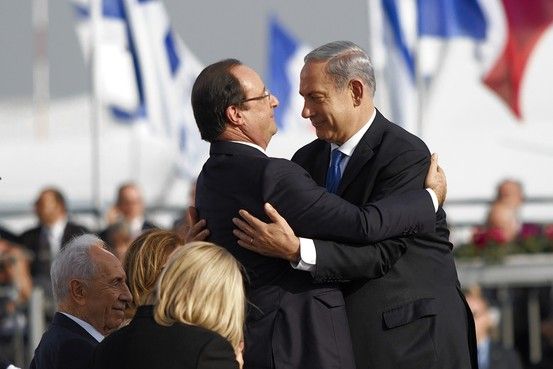 The Wall Street Journal reports: The Obama administration’s overtures to Iran are straining the U.S. alliance with Israel in ways not seen in decades, compounding concerns about the White House’s ability to manage the Middle East’s proliferating security crises, said current and former American diplomats.

In a sign of Israel’s growing disaffection with Washington, French President François Hollande was given a hero’s welcome when he arrived in Tel Aviv on Sunday for a three-day visit that would showcase Paris’s hard line against Iran’s nuclear program ahead of international talks in Geneva this week.

Mr. Netanyahu reiterated his criticism that the U.S.-backed compromise was a “very bad deal” while hailing Mr. Hollande for his opposition to the agreement at a joint news conference Sunday evening in Jerusalem.

“Your support and your friendship is real. It’s sincere. You were one out of six,” he said, referring to the six world powers participating in talks with Iran.

Both the U.S. and Israel insist the relationship is strong enough to sustain even a pronounced disagreement. But the State Department said on Sunday that it was considering sending Secretary of State John Kerry back to Jerusalem for the second time this month to try and repair the breach with Israeli Prime Minister Benjamin Netanyahu. [Continue reading…]

3 thoughts on “Strains with Israel over Iran snarl U.S. goals in Mideast”