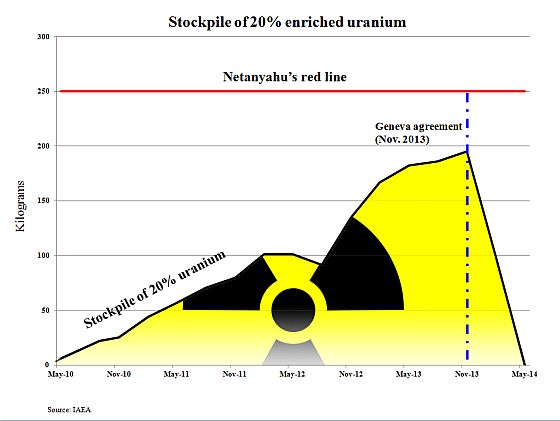 Who can forget Netanyahu’s UN presentation last year where he made his best case to the world about the threat Iran’s nuclear program poses to international security. To vivify this danger, Bibi unveiled a graphic sketch of a bomb on which he demonstrably drew a red line.

Having set the stage, he then asked, “Where’s Iran?” As he answered: “Iran’s completed the first stage. It took them many years, but they completed it and they’re 70% of the way there. Now they are well into the second stage.” He then vowed that Iran would never be allowed to cross his red line to the third stage. “The red line must be drawn on Iran’s nuclear enrichment program,” he argued, “because these enrichment facilities are the only nuclear installations that we can definitely see and credibly target. I believe that faced with a clear red line, Iran will back down.” [Continue reading…]