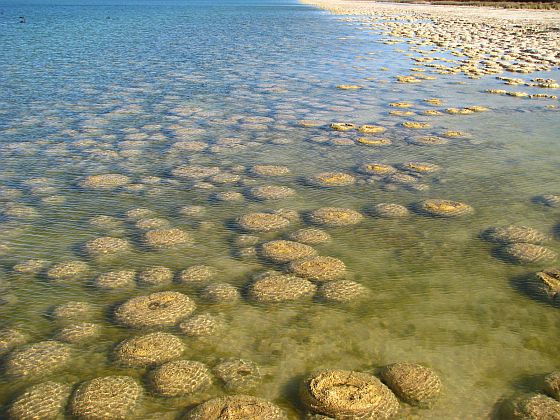 Evolution explains how life changes, but it doesn’t explain how it came into existence. A young physicist at MIT has now come up with a mathematical formula which suggests that given the right set of conditions, the emergence of living forms is not merely possible; it almost seems inevitable.

Let there be light, shining on atoms, and there will eventually be life.

Quanta magazine: Why does life exist?

Popular hypotheses credit a primordial soup, a bolt of lightning and a colossal stroke of luck. But if a provocative new theory is correct, luck may have little to do with it. Instead, according to the physicist proposing the idea, the origin and subsequent evolution of life follow from the fundamental laws of nature and “should be as unsurprising as rocks rolling downhill.”

From the standpoint of physics, there is one essential difference between living things and inanimate clumps of carbon atoms: The former tend to be much better at capturing energy from their environment and dissipating that energy as heat. Jeremy England, a 31-year-old assistant professor at the Massachusetts Institute of Technology, has derived a mathematical formula that he believes explains this capacity. The formula, based on established physics, indicates that when a group of atoms is driven by an external source of energy (like the sun or chemical fuel) and surrounded by a heat bath (like the ocean or atmosphere), it will often gradually restructure itself in order to dissipate increasingly more energy. This could mean that under certain conditions, matter inexorably acquires the key physical attribute associated with life.

“You start with a random clump of atoms, and if you shine light on it for long enough, it should not be so surprising that you get a plant,” England said.

England’s theory is meant to underlie, rather than replace, Darwin’s theory of evolution by natural selection, which provides a powerful description of life at the level of genes and populations. “I am certainly not saying that Darwinian ideas are wrong,” he explained. “On the contrary, I am just saying that from the perspective of the physics, you might call Darwinian evolution a special case of a more general phenomenon.”

His idea, detailed in a recent paper and further elaborated in a talk he is delivering at universities around the world, has sparked controversy among his colleagues, who see it as either tenuous or a potential breakthrough, or both.

England has taken “a very brave and very important step,” said Alexander Grosberg, a professor of physics at New York University who has followed England’s work since its early stages. The “big hope” is that he has identified the underlying physical principle driving the origin and evolution of life, Grosberg said.

“Jeremy is just about the brightest young scientist I ever came across,” said Attila Szabo, a biophysicist in the Laboratory of Chemical Physics at the National Institutes of Health who corresponded with England about his theory after meeting him at a conference. “I was struck by the originality of the ideas.”

Others, such as Eugene Shakhnovich, a professor of chemistry, chemical biology and biophysics at Harvard University, are not convinced. “Jeremy’s ideas are interesting and potentially promising, but at this point are extremely speculative, especially as applied to life phenomena,” Shakhnovich said.

England’s theoretical results are generally considered valid. It is his interpretation — that his formula represents the driving force behind a class of phenomena in nature that includes life — that remains unproven. But already, there are ideas about how to test that interpretation in the lab. [Continue reading…]

2 thoughts on “A new theory about the origin of life”