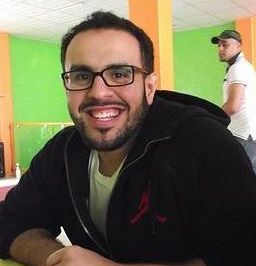 Mohamed Soltan, an American citizen who is a 26-year-old graduate of Ohio State University, moved to Egypt last year. In August he joined a sit-in at Rabaa Square in Cairo to defend what he considered the norms of American-style democracy.

Soltan was shot in the arm when security forces broke up sit-ins at Rabaa and another square, killing nearly a thousand people. “He was recovering from surgery to remove the bullet when the police raided his home and arrested him. His family, which is collecting signatures on a petition calling for his release, has released the following text of a letter Mr. Soltan wrote to President Obama from a cell in Cairo’s Tora Prison on his 26th birthday in November.”

Last week, I underwent a procedure to remove two 13” metal nails that were placed in my left arm to help support and repair the damage sustained from a gunshot wound I suffered at the hands of Egyptian security forces. The bullet that punctured my arm was paid for by our tax dollars. I was forced to undergo this procedure without any anesthesia or sterilization because the Egyptian authorities refused to transfer me to a hospital for proper surgical care.

After the nails penetrated the skin at my elbow from below, and ripped through my shoulder muscle from above. The doctor who performed this procedure is a cellmate. He used pliers and a straight razor in lieu of a scalpel. I laid on a dirty mat as my other cellmates held me down to ensure I did not jolt from the pain and risk permanent loss of feeling and function in that arm. The pain was so excruciating, it felt like my brain could explode at any given point. I was finally given two aspirin pills almost an hour later when the guards found my cellmates screams for help unbearable.

I share these details here because my mind drifted to 2007 as I stared at the ceiling of my cramped cell after surgery. During your first presidential campaign, I was moved by your message. I was so passionate about everything you represented. Finally, “change we can believe in.” I saw you, as many Americans did then, a true civil servant looking to put the disadvantaged first, and to pioneer a new model of governance. I felt I was part of the making of a great chapter in my country’s history. You were someone I wanted to stand behind, someone I wanted to support, so I volunteered and worked for your campaign in Ohio, a crucial swing state. As an O.S.U. student, I went door-to-door, made phone call after phone call, urged people to join the movement that would revolutionize American politics. It was time to go back to a government “for the people, of the people.”

Now as I sit in this crowded cell, I can’t help but ask myself, was I naïve to think you were a departure from the norm? [Continue reading…]