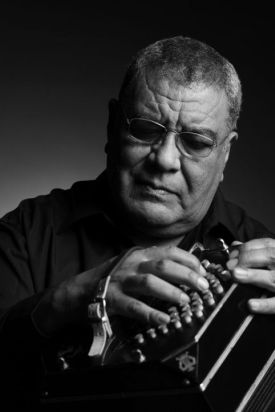 Timoteo “Dino” Saluzzi was born in 1935 in Campo Santo, a small village in the north of Argentina noted primarily for its sugar cane refining factory, around which local life revolved. Despite the absence of records, radio and indeed electricity in the Saluzzi household there was always music. His father played guitar, mandolin and bandoneon and taught Dino the rudiments of the latter instrument at seven. On this popular German import, the diatonic variety of the accordion developed by Heinrich Band, the young Dino at first played folk music. An uncle who had traveled in Europe added some of his acquired musical knowledge and, by the time he was 14, Dino knew enough to play in the Trio Carnaval, his first band. He began to play professionally while studying in Buenos Aires and was soon a member of the symphonic Orquesta Estable at Radio El Mundo, Argentinia’s first radio station. It was in Buenos Aires, too, that he met Astor Piazolla, as the term “tango nuevo” began to be aired. Though Piazolla and Saluzzi always respected each other’s work, Dino has never cared to put a label on his own music. In numerous interviews, however, he has stressed that it is neither an “art music” nor an “intellectual music” but rather a music of the emotions and one that attempts to express the widest range of feelings.

Quitting his radio orchestra job in 1956, Saluzzi returned to the district of Salta to develop his compositions, now consciously incorporating folk music elements. From this point onward, however, he was concerned that his music would not “fall into the common eclecticism” that had already diluted several variants of Latin American music. He sought a flexible form that was “vital and real beyond the conventions”: this has proved to be a life’s work. In the early 70s Dino was briefly associated with Gato Barbieri, helping the saxophonist towards a rediscovery of his own roots on, for example, the album Chapter One: Latin America. With Mariano Mores he undertook numerous South American tours, playing concerts in Bolivia, Peru, Columbia and Venezuela. He also worked as arranger and soloist for Enrique Mario Francini’s Sinfonica de Tango which brought him to Japan in 1977. In 1979 he launched the first Cuarteto Dino Saluzzi, whose early European appearances made headlines, and also co-founded the experimental chamber ensemble Música Creativa.

Saluzzi’s ECM discography was launched with the solo album Kultrum, spontaneously created in the studio and an enduring example of the bandoneonist’s art as “storyteller.” Dino described the music as “an imaginary return” to the little towns and villages of his childhood. The vividness of his musical sketches was not lost on reviewers: “Reworking elements of tango, South American Indian music, backwater folk tunes, and other root sounds, his breadth of feeling makes for remarkable listening” – Down Beat. A second solo album Andina, prompted America’s Fanfare to write that “Dino Saluzzi is probably the greatest living master of the bandoneon”, concluding that the recording was “a stunning portrait of an amazing musical talent.” [Continue reading…]