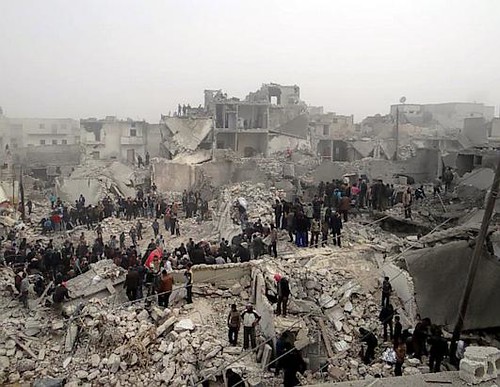 Deborah Amos reports: [I]n Iran, discussions about Syria are surprisingly frank, complex and demonstrate growing divisions over how to handle a costly war that has no end in sight.

At Tehran University, students of international relations study the Syria-Iran alliance, one of the most enduring in the region. Yet there are now more questions about Iran’s recent role in the Syrian bloodshed.

“What is happening in Syria, it’s related to us; it is an obvious catastrophe,” says one student in a discussion on campus. He didn’t give his name because discussing Syria is sensitive.

Iran is reportedly spending billions to prop up Syrian President Bashar Assad. Saudi Arabia backs the rebels. The student believes Syrian civilians are paying the price. Innocent children are dying, he says, his voice rising. “But nothing is being declared as a solution,” he says, “because of the balance of power.”

Another student, Masa, 23, says she follows the news of the Syrian uprising on Iranian television. When it comes to insurgents, she says, “For me, I think they are just people, but Iran TV wants to show them as terrorists. Our media is not neutral.”

Iranian student activists launched a website and a Facebook page in Farsi and English last month to promote news from Syria for Iranians.

“The Iranian regime is supporting a dictator hated by most Syrians,” reads the founding statement on the site, “and is wasting economic resources desperately needed by Iranians at home.”

The regional rivalry between Saudi Arabia and Iran is now at the core of the Syrian conflict, says New York University academic Mohamad Bazzi, who is writing about the war. The Iranians have put money and manpower behind the Assad regime, he says.

“The Iranians are helping the regime survive day to day,” he adds.

But Iran’s investment has come with unexpected costs. The war has destabilized Iraq and Lebanon, where Tehran has allies and interests; and Tehran’s image has been tarnished in the Arab world. [Continue reading…]