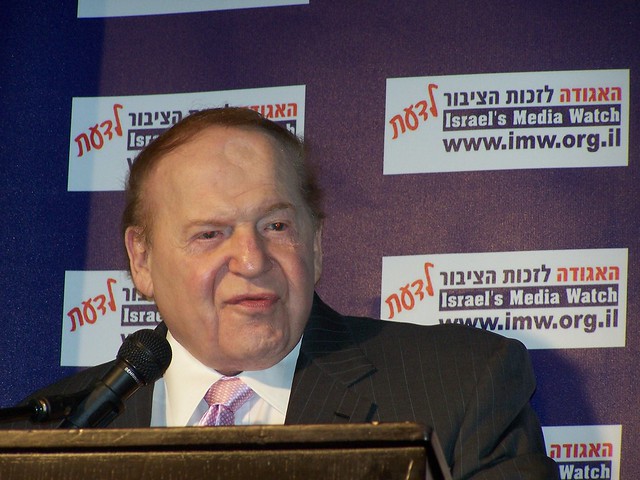 Peter Beinart writes: Imagine this. Hillary Clinton, Andrew Cuomo, Elizabeth Warren and multiple lesser Democratic notables travel halfway across the country to kiss the ring of a Palestinian-American billionaire who has shown himself willing to spend tens of millions of dollars subsidizing presidential campaigns.

The billionaire insists that there is no such thing as the Jewish people. It’s a hoax; the Jews “have fooled the world very successfully.” And he declares that “There isn’t a” Jew “alive who wasn’t raised on a curriculum of hatred and hostility toward the” Palestinians.

Change the words “Democrat” to “Republican,” “Israel” to “Iran” and “Palestinian” to “Jewish,” and that’s exactly what just happened. Leading contenders for the 2016 GOP presidential nomination spent last weekend wooing and feting a billionaire, Sheldon Adelson, whose views – if directed at Jews—would put him in the company of Louis Farrakhan and Mahmoud Ahmadinejad. [Continue reading…]