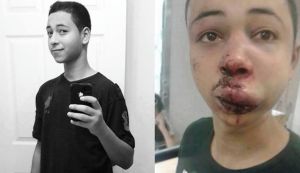 ABC News reports: A 15-year-old American high school student was beaten and jailed by Israeli police in what his mother called an “attempted murder,” as the incident happened a day after his cousin was killed.

The teen, Tariq Abu Khdeir from Tampa, Florida, was on a summer holiday with his parents and sisters in Jerusalem, visiting family in the eastern part of the city. Video clips posted online show three Israeli police officers in riot gear repeatedly beating a young Palestinian, identified as Abu Khdeir by his family, and dragging him away to arrest him.

On Wednesday morning, Tariq’s cousin, 16-year-old Muhammad Abu Khdeir, was murdered in what is widely believed to have been a revenge attack for the recent kidnapping and murder of three Israeli Jewish teens.

Tariq was arrested on Thursday evening. Photos of him in detention show his severely swollen and bruised face, which his mother, Suha Abu Khdeir, said was unrecognizable when she first saw him following the arrest. [Continue reading…]