In spite of this nation’s numerous military misadventures and its corrupt military establishment, many Americans still have an uncritical admiration for this country’s generals — men whose stainless uniforms and steely faces seem to be an outward representation of their trustworthiness and moral stature. 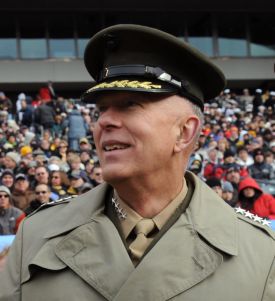 Who better to speak in defense of Israel, than a good Christian soldier like retired General James T Conway, former commander of the United States Marine Corps?

Propaganda, which is nothing more than a form of political advertising, works by engaging its target audience emotionally while circumventing any kind of analytical process. It trades in ideas whose truth should seem so obvious that we will accept them without thought. And the easiest way of making an idea seem true is through endless repetition.

The Israeli government and those inside and outside Israel who operate in its service, have settled on two messages — on human shields and tunnels — through which they want to demonize Hamas and cover up war crimes committed by the Israeli Defense Forces.

In “The Moral Chasm Between Israel and Hamas,” an op-ed for the Wall Street Journal, this is how Conway regurgitates Israel’s message about human shields:

Conway describes the Hamas tunnels, of which Israel is reported to have discovered about 30, as having been “designed for launching murder and kidnapping raids.”

Let’s first consider the claim that Hamas uses human shields, since this has become Israel’s favorite explanation for why the IDF has killed hundreds of Palestinian civilians.

The human shield, as a concept, is a mainstay of American movie and TV drama. We all know how it works.

The bad guys hold women and children at gunpoint and the good guys hold fire because they don’t want to kill the innocents.

It’s an expression of the moral depravity and cowardice of evil men who know how to exploit the good intentions of righteous men. (It’s also a narrative in which the heroes and villains are all men and the powerless women can do no more than hope they fall into the right arms.)

Wait a minute! That’s not how it’s supposed to work. What’s the point of holding a human shield if your adversary has little interest in protecting the life of that supposed “shield”?

This gets to the nub of the issue: the only kind of human shield worth holding is one whose life is valued by your adversary.

The Israelis understand this. That’s why, as has been well documented, they have been seen using Palestinians as human shields.

The closest Hamas can come to making forcible use of human shields is by taking prisoners. Which brings us to the tunnels.

The tunnel is the perfect abode of the bogeyman. It has iconic power in the representation of an invisible evil force — a force which emerges out of darkness and might spring up from anywhere. No wonder Israel’s propagandists believe they can use the “terrorist-tunnel threat” to their advantage.

There’s no question that militants in Gaza have constructed tunnels under the fortified perimeter which surrounds the open-air prison of the Gaza Strip. We can also surmise that these have not been constructed to provide “escape” routes to Israel.

What we can deduce is that far more time and effort has been invested in the construction of these tunnels than in their use. Moreover, if or when any of these tunnels gets put into service there is a high probability that the IDF will quickly thereafter discover the tunnel’s location and just as quickly destroy it.

The implication, therefore, is that these tunnels have been constructed as part of a defensive infrastructure to only be used at a time of necessity. That inference is further reinforced by the fact that extended periods of calm during which ceasefires have been in effect, have not been interrupted by the Palestinians going on the offensive and trying to capture Israeli soldiers in the vicinity of the fence.

I don’t actually know whether General Conway is a Christian soldier. He could believe in the non-dual philosophy of Advaita Vedanta. He could be a Sufi, or he might be an initiate of the Kabbalah.

What I do know is that when Conway left the Pentagon, like so many of his other colleagues, he passed through the revolving door that leads straight into the defense industry. There he became a director of Textron, a corporation one of whose subsidiaries, AAI, manufactures drones used by Israel.

I have little doubt that when sales reps for AAI tout the effectiveness of their products, they proudly point out how they have been “battlefield tested” by the IDF.

In other words, to be absolutely blunt, when General Conway takes to the pages of the Wall Street Journal to offer lessons on the morality of Israel’s current war on Gaza, I have little doubt that this is a war from which Conway is personally profiting — and therein, I would suggest, lies the real morality tale.