On August 18, Alaa Abd El Fattah wrote: At 4 pm today, I celebrated with my colleagues my last meal in prison.

I have decided — when I saw my father fighting against death locked in a body that was no longer subject to his will — I decided to start an open hunger strike until I achieve my freedom. The well-being of my body is of no value while it remains subject to an unjust power in an open-ended imprisonment not controlled by the law or any concept of justice. 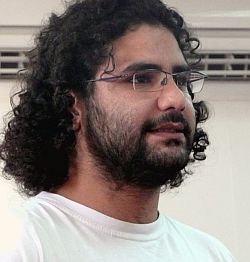 I’ve had the thought before, but I put it aside. I did not want to place yet another burden on my family — we all know that the Ministry of the Interior does not make life easy for hunger strikers. But now I’ve realized that my family’s hardship increases with every day that I’m in jail. My youngest sister, Sanaa, and the protesters of Ettehadiya were arrested only because they demanded freedom for people already detained. They put my sister in prison because she demanded my freedom! And so our family’s efforts were fragmented between two prisoners, and my father’s heart worn out between two courts — my father, who had postponed a necessary surgery more than once because of this ill-fated Shura Council case.

They tore me from my son, Khaled, while he was still struggling to get over the trauma of my first imprisonment. Then there was the brute performance of the Ministry of the Interior as they carried out their “humane” gesture — my visit to my father in the ICU. The police tried to empty the hospital ward and corridor of patients and doctors and family and nurses before they would allow the visit. They set times and informed us, and then canceled. In the end they snatched me from my prison cell at dawn with the same tenderness shown when they arrested me.

The police general could not decide how to ensure I would not escape. He was completely convinced that this was all a ruse, that nobody was sick and we were conspiring to deprive him of his hours of rest. I arrived at the hospital chained to the iron frame of the police transport vehicle, and, finally, in the ward they snuck in a camera and filmed us against our will.

All this served to prove to me that my being patient would not help my mother, Laila, my sister, Mona, or my wife, Manal. That waiting does not relieve my family of hardship but actually makes them prisoners like me, subject to the dictates and the moods of an organization devoid of humanity and incapable of compassion. [Continue reading…]