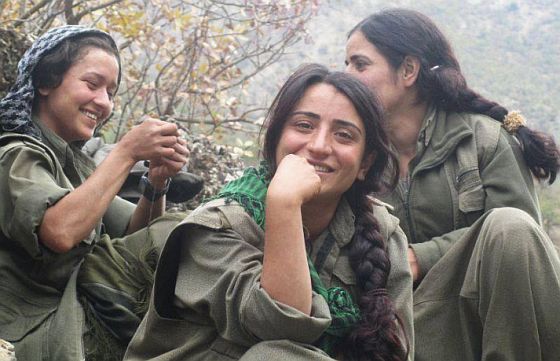 The Turkish columnist, Kadri Gursel, writes: [T]he PYD [the Democratic Union Party, the PKK’s Syrian branch] has been able to hold on to these three regions [Ras al-Ain, Kobani and Afrin, in northern Syria] and resist the jihadists for more than two years. Hence, long before IS’ capture of Mosul, the PKK already deserved to be recognized as the Middle East’s only fighting force to defy and resist IS for the struggle it has waged in Rojava [Syrian Kurdistan].

The Kurdish forces in Syria have surprised the world not only with their resolve against the jihadists but also with their female fighters. Against a barbarian mindset that enslaves and sells women as concubines, the PYD has displayed a secular mindset embracing gender equality, which has enormously contributed to its international image.

In Iraq, on the other hand, the PKK has put aside disagreements with the Kurdistan Democratic Party (KDP) to form a national military alliance against the jihadist threat to Iraqi Kurdistan.

That the Western public is already discussing the prospect of the PKK’s removal from the lists of terrorist organizations is a clear indication of how much the PKK’s struggle against the jihadists has contributed to its international standing.

Mazlum, 15, is in a Turkish prison under suspicion of collaborating with the Kurdistan Workers Party (PKK), a group branded a terrorist organization by Turkey, the European Union and the United States.

Agit, 22, is in northern Iraq battling the jihadist Islamic State in Iraq and Syria (ISIS) with the same group. The young man is one of thousands of PKK soldiers who have joined the war against ISIS in Kurdish areas of Syria and Iraq, and who have become vital to the international community’s battle against the powerful Islamist insurgency.

“The Kurdish fight has spread,” the 43-year-old grocer said at a recent rally marking the anniversary of the PKK’s armed struggle against Turkey. The group has battled the Turkish state for cultural and political rights and Kurdish self-rule for 30 years in a conflict that has claimed more than 30,000 lives.

“We must protect our Kurdish brothers and sisters,” she said amid a crowd of thousands of PKK fighters and supporters celebrating the 30th anniversary of the group’s struggle. “In doing so, we will finally get our own Kurdish state.”

Many of Turkey’s Kurds – a disenfranchised minority that makes up a fifth of the country’s population – feel revitalized by the PKK’s role in Syria and Iraq, and hope their successes on the battlefield will produce political victories such as greater autonomy, more rights and perhaps even an independent state.

“In a way, we have to thank the Islamic State. They’ve united us, reviving the great Kurdish cause,” said Seyid Narin, a municipal mayor in Diyarbakir, long the center of the Kurdish resistance and separatist movement in southeast Turkey. Ten months ago he lost a son who was fighting in Syria — a second one is now in northern Iraq with the PKK.

“Our struggle is reborn,” he said.

This struggle poses a potential threat to Turkey’s ruling Justice and Development Party (AK Party) which has spearheaded efforts to restart peace talks with the terror group and now tolerates its military role in Turkey.

“Both the (ruling party) and PKK know that ISIS must be stopped … if anything, this fight will bring the AK party and Kurds closer together,” said Bedirhan Akyol, a Kurdish Justice and Development official in Diyarbakir. “The PKK is becoming stronger through this fight, but that won’t have a bad effect on peace talks.”

But Akyol’s positive spin belies a deep unease in Turkey about the PKK’s role fighting ISIS in Syria and its place in society at large. That the long reviled organization has been cast as the hero in the war against homicidal Islamist fighters has prompted alarm and anger in some circles.

The ruling party and the PKK are essentially creating laws that would result in the break- up of Turkey, said Oktay Vural, a leading Turkish opposition politician.

“The terrorists failed to divide Turkey for 30 years, but the country is now being brought to the brink of partition in the name of [Recep Tayyip] Erdogan’s political future,” he wrote in an editorial, referring to the country’s powerful prime minister and president elect.

Even some who do not consider talks with the PKK treasonous, like Vural does, worry that Turkey already has enough on its plate with the regional threat posed by ISIS and a teeming Syrian refugee population, before dealing with the legitimization of a group long branded as terrorists. [Continue reading…]