In an interview broadcast on NPR on Saturday, “realist” supremo, Henry Kissinger, made this extraordinary statement:

I think we would find, if you study the conduct of [the military], that the Obama administration has hit more targets on a broader scale than the Nixon administration ever did. And, of course, B-52s have a different bombing pattern.

On the other hand, drones are far more deadly because they are much more accurate. And I think the principle is essentially the same. You attack locations where you believe people operate who are killing you. You do it in the most limited way possible. And I bet if one did an honest account, there were fewer civilian casualties in Cambodia than there have been from American drone attacks. [My emphasis.] 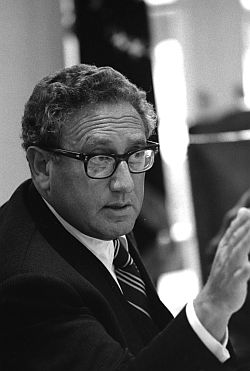 Obviously, Kissinger’s purpose in making this claim is not to portray President Obama as a war criminal. After all, Obama often acts like one of Kissinger’s most devoted students.

Kissinger wants to be seen as having done during the Vietnam war what any American in his position would have done. And since from the American public there has been little opposition to Obama’s use of drones, Kissinger hopes to liken himself to Obama and thereby shed his image as a war criminal.

There’s no doubt that Obama’s use of drones has been cynical, counter-productive, and indeed a criminal exercise in extra-judicial killing. But for Kissinger to claim that more civilians have been killed by drones than he killed by carpet bombing Cambodia is outrageous, absurd, and patently false.

The Bureau for Investigative Journalism has been the leader in documenting the effects of America’s drone wars. Its estimate of the number of casualties in Pakistan, Yemen, and Somalia since 2002 is at least 571 and at most 1225 civilian deaths.

The Trials of Henry Kissinger (2002) describes how this happened:

Kissinger is now 91 and no doubt increasingly preoccupied with how he will be remembered after his death. Americans born after the Vietnam era might view him as a figure from the past (if they view him in any way at all), but no one should underestimate his enduring influence. Ironically, his realist worldview has tacitly been accepted even by people who identify themselves as anti-interventionists and opponents of war and for whom Kissinger might be one of the despised characters in American history.

In post 9/11 America, even those who are willing to argue that U.S. foreign policy should be informed by humanitarian principles also feel compelled to bow towards U.S. national interests. For instance, in as much as there was any debate about military intervention in Syria after the chemical attacks a year ago, the element in the argument that carried more weight than any other was America’s national interest. The wide consensus that America had no appetite to become entangled in another war and that getting dragged into the war in Syria would not serve our interests, overshadowed any consideration about what might serve the interests of the Syrian people. Their appeals for international support in their struggle to overthrow Assad have fallen on deaf ears among those who believe that there is no cause greater than the pursuit of our national interests.

Likewise, when it comes to a global issue such as climate change, America’s role in having precipitated the crisis and the fact that world’s poor living in flood-prone countries such as Bangladesh will suffer the worst consequences, appear to be of less influence in shaping American public opinion than are perceptions of how much the U.S. will be affected. In other words, to the extent that Americans believe this country can adapt and even prosper, the expectation that we can live while millions of others die, makes climate change look like a manageable problem.

Kissinger doesn’t have to worry about his legacy because with very few exceptions, Americans are all Kissingers now.