Since 2010, the Global Green Economy Index has been tracking the transition away from fossil-fuel based economies, consider two elements of a green economy: perception and performance. Countries with a high perception score are viewed as environmentally conscious leaders, while performance measures actual investment in green energy, overall infrastructure and development.

In these terms, the U.S. ranks #6 in perception, just behind the leading northern European countries, but #28 in performance, ranking below countries such as Costa Rica, Colombia, Peru, Kenya, Brazil, Chile, Uruguay, Mauritius, Zambia, Ethiopia, and Rwanda. 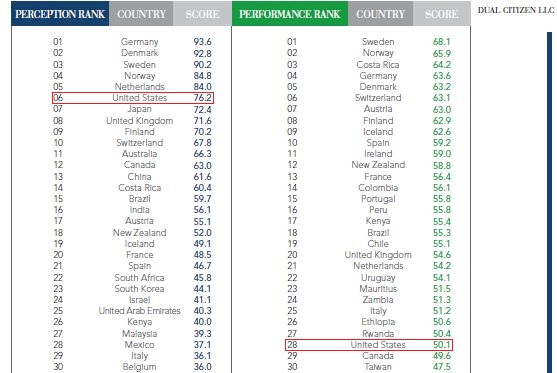 China and India are also failing to match performance with perception — China ranks #13 in perception and #55 in performance, while India ranks #16 and #49.

Sweden and Norway stand out in having performance rankings (#1 and #2) that are slightly better than their perception rankings (#3 and #4) — two countries that face the high energy demands created by cold climates, short winter days, and extensive road systems.