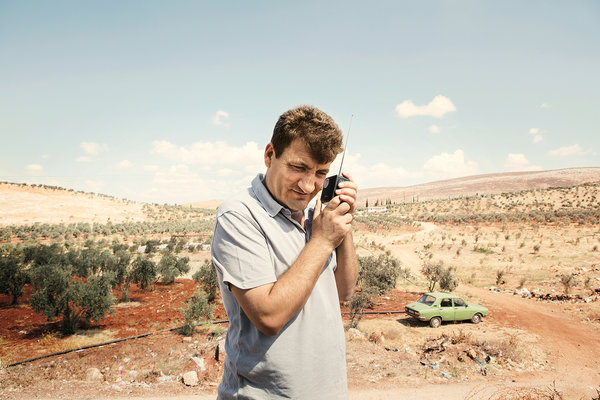 Eliza Griswold writes: The overhead light in the blue Mazda 626 wasn’t working. Raed Fares, a Syrian activist whose video protests skewer ISIS and President Bashar al-Assad alike, reached up to fiddle with the light bulb before squeezing himself out of the driver’s side door. The street was in darkness. In the last few years, the Assad government cut most of the electricity (along with running water and mobile-phone service) to Kafranbel, the town in northwestern Syria where Fares lives. The only light came from an LED strip in his neighbor’s front doorway that was hooked up to a car battery. It was 12:45 a.m. on Jan. 29, 2014, and Fares, who often works until 4 a.m., had left the office early. As he fumbled to fit his key into the car’s lock, he heard the slap-slap of feet running toward him.

Here they come, he thought.

The feet stopped just in front of his car. The Czech pistol he usually carries was in his house, 15 feet away. In the watery glow of the light behind him, Fares could make out two ISIS soldiers. One, clad in a woolen mask, ammunition vest, windbreaker and unlaced boots, opened fire, spraying the car, the mud wall and Fares with bullets. Fares felt their heat sear through his canvas jacket and jean shirt and into the right side of his chest and shoulder. When he collapsed to the ground, a childhood nightmare returned: three black dogs, chasing him.

“There is no God but God, and Mohammad is his prophet,” he said as loudly as he could. He hoped this statement of faith would send him to heaven.

As a pool of his own blood spread around him, Fares lay in the road. He tried to stifle his groans, in fear that his attackers would return. Minutes later, his elder brother, who heard the shots from his home nearby, dragged Fares out of the street and into a car to race to the hospital.

“Who shot him?” a friend in the car asked his brother.

Raed struggled to repeat what he had seen.

“I’m dying,” he said. Then he slipped from consciousness.

Eight months later, Fares, 42, was in the back seat of a pewter-colored Kia, driving through southern Turkey and chain-smoking Lebanese cigarettes. In all, the would-be assassins fired at Fares 46 times. Twenty-seven bullets struck the wall behind him; 17 hit his car. Only two struck him. They shattered seven bones in his shoulder and ribs and punctured his right lung. From his hospital bed, he continued to orchestrate protests, posting them on Facebook and YouTube. Many used the block-lettered banners for which he’s known, broadcasting messages like: “OBAMA! YOUR ROLE IN SYRIA WILL NEVER BE ACCEPTED AS A MISTAKE LIKE CLINTON’S IN RWANDA, BUT IT WILL BE A PREMEDITATED CRIME.” Others relied on cartoons, like one of a Trojan horse with ISIS inside and “Made in U.S.A.” on its side.

“I still have trouble breathing,” Fares said. “My doctor says my lungs should be no problem because of the size of my nose.” (Fares does have a big nose.) The two Americans in the front seat laughed. One, a 57-year-old named Jim Hake, is the founder and chief executive of Spirit of America, a nongovernmental organization with the explicit mission to support U.S. military and diplomatic efforts. (He relentlessly asks “What do you need?” The first time he asked it of Fares, Fares answered with withering dryness, “A new country.”) [Continue reading…]